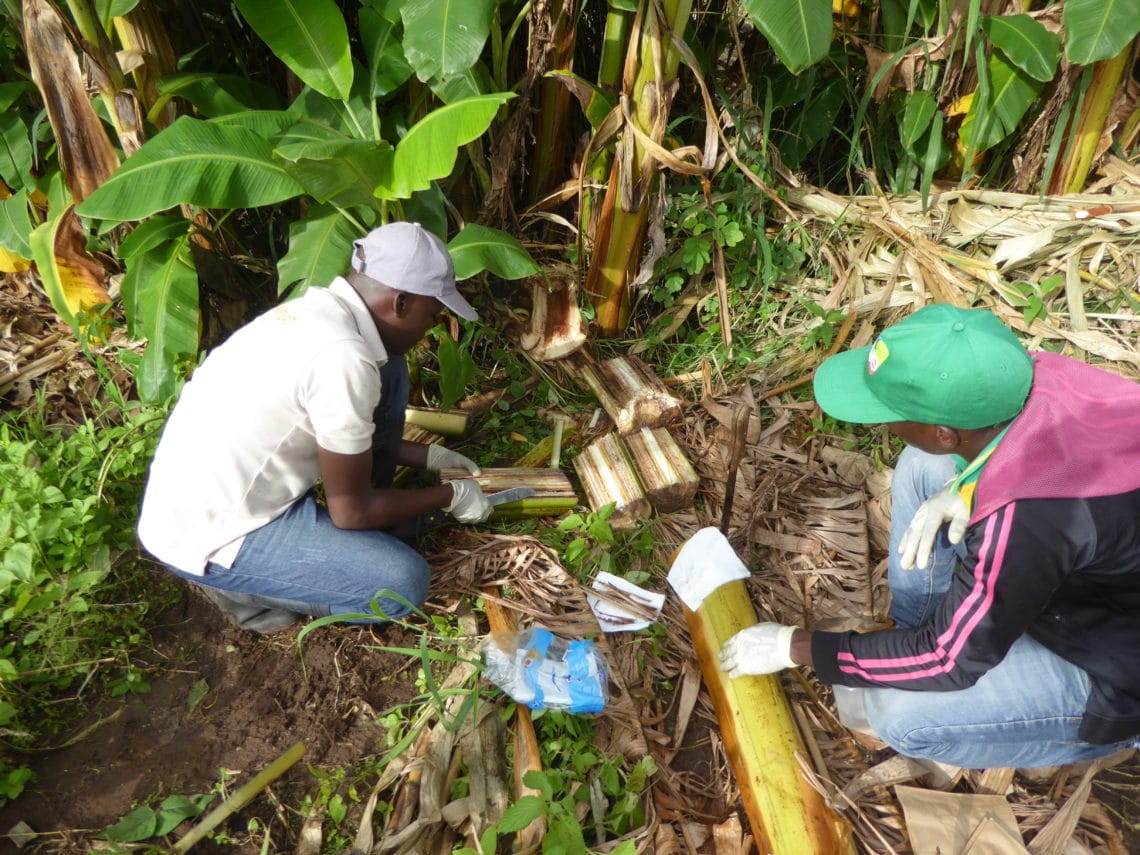 “Pandemic” has become a household term over the past year, but uncontrolled disease outbreaks do not occur solely in humans. A virulent strain of a fungus found in the soil known as Tropical Race 4 (TR4) is increasingly threatening key global banana production systems, an important source of income and food for hundreds of millions. A group of scientists, with support from the CGIAR Research Program on Roots, Tubers and Bananas (RTB), has articulated components of a powerful integrated response to the threat by sharing their knowledge via a virtual symposium.

“Bananas are no stranger to disease outbreaks,” says Guy Blomme, a banana researcher with the Alliance of Bioversity International and CIAT (the Alliance). “In the first half of the twentieth century, Gros Michel, the most popular dessert banana worldwide, was nearly wiped out by Race 1 strains that, like TR4, cause Fusarium wilt of banana (also known as Panama disease).”

The soil-borne fungus attacks the vascular system of the banana plant and causes it to wilt and die. There is no effective way to get rid of the fungus once it is in the soil. “During the first epidemic, the banana industry could only recover by replacing Gros Michel with Cavendish cultivars, which are resistant to Race 1 strains,” says Miguel Dita of the Alliance. However, Cavendish cultivars, along with many other types of banana, turned out to be susceptible to TR4.”

The large-scale cultivation of Cavendish cultivars, which now account for more than 50% of the global banana production, including the 15% that are traded internationally, and the multiple ways in which growers are connected, has facilitated the global spread of TR4. It has also found its way to other types of bananas, as the recent incursion in Mayotte in the Indian Ocean shows.

Reports of TR4 first started coming in from Taiwan in the 1960s, but its accelerated spread to major banana export countries – most recently to Colombia is alarming scientists and prompting them to act urgently. Mozambique is a particularly concerning case, where the disease spread to infect half a million plants within only three years following its first detection there in 2013. The risk of further spread to neighboring countries poses a great risk to commercial and small-scale producers alike in Africa. The first recorded TR4 incursion into Latin America raises new concerns as the unbridled spread of the pathogen will have a more devastating effect, due to the higher proportion of susceptible Cavendish banana.

But there is also good news, Australia has been able to slow down the spread of the disease due to rigorous implementation of biosafety measures, while promising tolerant germplasm has been/is being developed in e.g. Taiwan, China, Australia and India.

“Just as epidemiologists have convened worldwide to combat COVID-19, we have brought together banana researchers from across the globe to further our knowledge of TR4 and other Fusarium strains and contribute to a plan of attack to stop the spread of the pathogen,” says Guy.

The Alliance and the International Institute of Tropical Agriculture (IITA) with the support of RTB held a two-day virtual mini-symposium on 16–17 December 2020 which presented a state-of-the-art overview of research on combatting Fusarium wilt in banana, with a focus on TR4.

“The symposium provided a platform for 21 research teams from across the globe to share what we know about Fusarium TR4 and how we can slow its spread,” says George Mahuku, a plant pathologist with IITA and one of the symposium organizers.

Many solutions were presented, including ways to detect and map Fusarium wilt (TR4 and other Fusarium strains), and new insights were presented from Southern Africa, the Greater Mekong Delta and Colombia. The symposium also revealed progress in improving germplasm, and examples of more effective surveillance and control methods were presented.

Another session looked at evaluating biocontrol agents such as promising interactions with the beneficial fungus Trichoderma spp., the application of used mushroom substrate and ground-cover root flavonoids and phenolic acids to suppress the spread of the fungus.

Molecular biologists presented their findings based on the pathogen’s genome sequence analyses which will help identify genetic markers that can help target biological control efforts. Participants were also briefed on Fusarium spore survival rates in water and innovations in disease detection.

Ultimately, the best long-term option to combat TR4 will be to develop TR4-resistant banana cultivars using conventional and molecular plant breeding techniques or mutation breeding. Efforts to screen a wide range of banana cultivars are showing promising results as some of them have displayed resistance to TR4.

As part of developing a more strategically effective approach to Fusarium wilt Race 1 and TR4 mitigation and containment, the presentations from the symposium are now being summarized in a book of abstracts and many full papers will be published in a special issue of the Journal of Fungi in 2021. The symposium organizers also held a masterclass on Fusarium wilt of banana between 24 – 26 November 2020. Videos of the presentations and subsequent expert discussions are available to view on YouTube. “The virtual symposium and masterclass are key to helping us find integrated approaches for both subsistence small-holder farmers and exporters,” says George. “If we are to limit the spread of Fusarium, we must effectively mobilize global, regional, national, and local agencies and get them to collaborate and develop platforms to strengthen plant quarantine, containment and mitigation efforts.”