Breaking barriers to uptake of improved sorghum in Burkina Faso, one social media post at a time 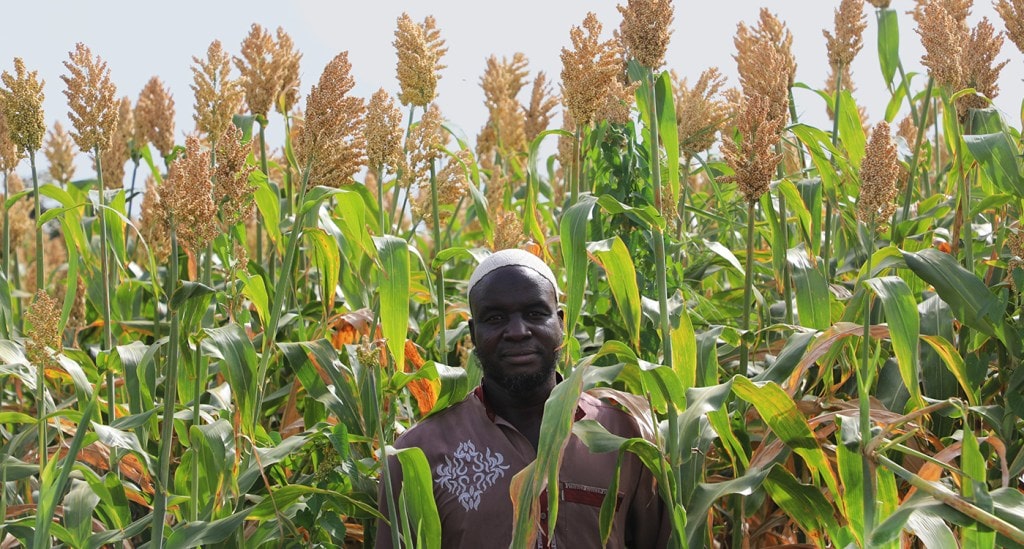 A small number of farmers pioneering seed production of a novel sorghum variety in Burkina Faso are also breaking new ground on social media. Turning the spotlight on Soubatimi, the new sorghum variety that the AVISA Project is disseminating, they have shown a way around one of the biggest roadblocks to Africa’s uptake of game-changing improved crops– unawareness.

“Right from our first cropping year of Soubatimi, I took photos of the plants every 15 days and posted them on Facebook and WhatsApp,” said Sana Pascal Ouedraogo, a research technician who took up farming after retirement. “People were happy to see how well the variety performed and were curious to learn about it.”

“Most people were impressed by the fodder and leaves that remained green up to maturity,” adds Henri Zoungrana, who teamed up with Mr Ouedraogo in 2019 to produce Soubatimi seed on 6 ha in Zoundweogo province, about 102 km from Ouagadougou, Burkina Faso’s capital city.

Soubatimi was developed as a dual purpose crop for food and animal feed. It was developed by ICRISAT Mali, IER (Institut d’économie rurale), Mali’s agricultural research institute, and the French research center CIRAD (Centre de coopération internationale en recherche agronomique pour le développement). Not long after its release in 2016, the variety became one of Mali’s most popular sorghum varieties. It has since been trialed in Burkina Faso, Ghana, Niger, Nigeria and Togo. Certified seed production started in 2019 in Niger and Burkina Faso.

According to Dr Baloua Nebié, Senior Sorghum Breeder, ICRISAT Mali, Soubatimi can yield up to 2 tons of grain per hectare and 10 tons of dry stover per hectare in farmers’ fields. In the last two years of seed production in Zoundweogo alone, over 100 farmers came to know of the variety through social media and nearly half of them have lined up for seed in the next cropping season. Around 10 tons of certified seed from 2020’s harvest has been made available for sale in Manga zone and will be used to plant around 1,200 ha this year.

“Lack of awareness of improved varieties translates to low uptake by farmers. Increasing awareness of new crops and improving access to their seed is key to achieving the goals of increased productivity, higher incomes and better nutrition,” Dr Nebie said. “Farmer to farmer communication is highly influential, but we had to see it manifest on social media. For researchers and institutions, this is a nudge to closely integrate social media with other means of extension.”