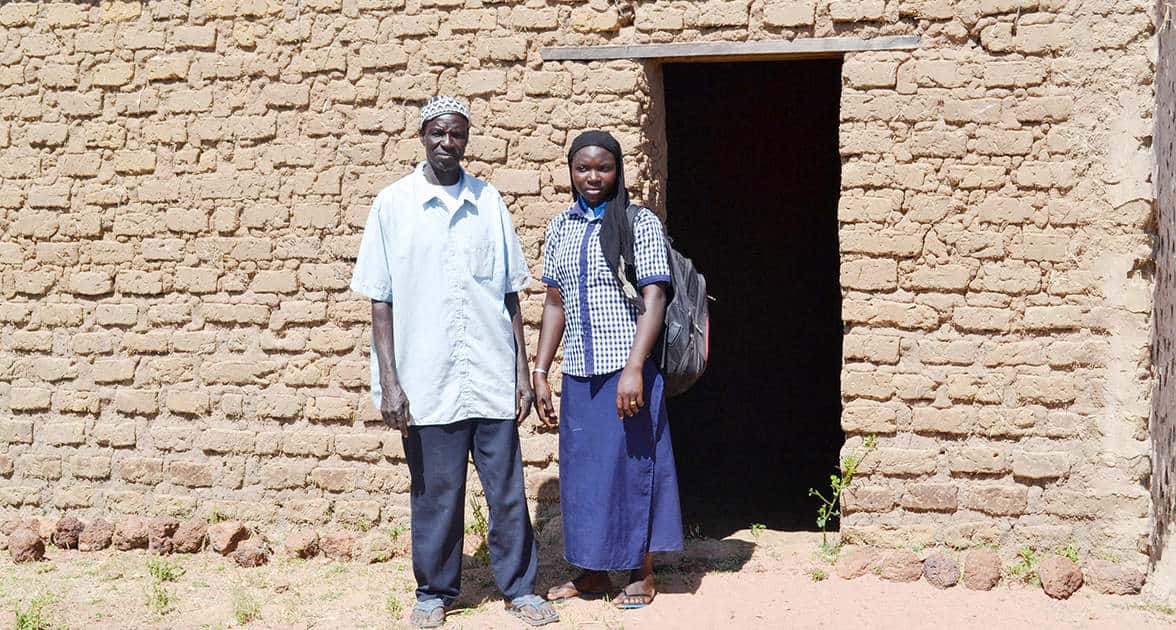 Farmer Timothée Goita has built a house in Yorosso town to facilitate accommodation for his daughter Safiatou, who studies there. Photo: N Diakite, ICRISAT

Double yields from improved varieties, access to storage facilities and timely credit through the warrantage system has kept sorghum farmers in Mali from selling their harvest at throwaway prices during a glut, helping them earn 50% more income. Farmers are now able to think beyond sustenance and for most of them who had been school dropouts, the education of their children is a priority. Impacts like these, coupled with case studies, were shared with a high-level USAID project delegation that visited Mali recently.

Following the success of the warrantage system approach a few years ago in the AGRA–funded microdosing project, the USAID-funded Africa RISING’s large-scale Diffusion of Technologies for Sorghum and Millet Systems (ARDT_SMS) project replicated it with great success. Out of the 34 Innovation Platforms that were initiated (29 in Sikasso and 5 in Mopti), three were introduced to the warrantage system by the project, benefiting hundreds of farmers like Timothée Goita and Seydou Dao.

Timothée, an active member of one of the innovation platforms in Sikasso, adopted a new high-yielding and drought-tolerant improved sorghum variety, Tiandougou coura, developed by Institut d’Economie Rurale (IER) in collaboration with ICRISAT. “During the drought years, I barely harvested 600 kg/ha of the local variety. The improved variety, which I got from the head of the agricultural sector of my region as part of the ARDT-SMS project, gave me a yield up to 1,500 kg/ha,” he says. After harvest, a microfinance arrangement through the warrantage system helped him to sell his produce at a good price and at a convenient time.

Recalling how it was earlier, before the project interventions, Timothée says, “I had to either work as a laborer in neighboring fields or migrate to the city. Even then, I was able to meet only half of my family’s annual food needs. Now I produce enough food to feed my family for the whole year. I can afford more than three meals daily for my children. My family eats millet- and sorghum-based foods alternating with maize, cowpea and other products to bring in more diversity in our daily diet. I sell part of my surplus to buy different foods and I can pay for the school fees of my children on time,” says Timothée.

In Sikasso, Mali, the annual cost of primary education in a village public school is often the equivalent of the cost of 300 kg of cereals and FCFA 15,000 (US$ 25) for renting a house, prohibitively expensive for most farming households. Sometimes, a household can support a few of their children’s school fees while asking the others to quit. Farmer Seydou Dao, who had to quit school, does not want his children to face a similar situation. “In 2019, I paid my children’s school fees (about FCFA 80,000 (US$ 133.3)) from the sale of Jakumbe (CSM63E) improved sorghum variety from IER-ICRISAT collaboration,” says Seydou. Many farmers in the community have similar success stories to share.