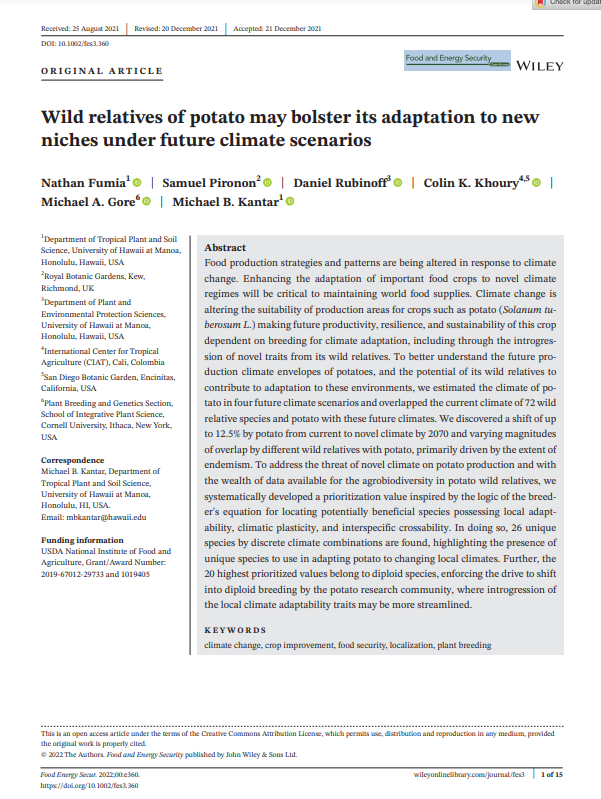 Food production strategies and patterns are being altered in response to climate change. Enhancing the adaptation of important food crops to novel climate regimes will be critical to maintaining world food supplies. Climate change is altering the suitability of production areas for crops such as potato (Solanum tuberosum L.) making future productivity, resilience, and sustainability of this crop dependent on breeding for climate adaptation, including through the introgression of novel traits from its wild relatives.

To better understand the future production climate envelopes of potatoes, and the potential of its wild relatives to contribute to adaptation to these environments, we estimated the climate of potato in four future climate scenarios and overlapped the current climate of 72 wild relative species and potato with these future climates. We discovered a shift of up to 12.5% by potato from current to novel climate by 2070 and varying magnitudes of overlap by different wild relatives with potato, primarily driven by the extent of endemism. To address the threat of novel climate on potato production and with the wealth of data available for the agrobiodiversity in potato wild relatives, we systematically developed a prioritization value inspired by the logic of the breeder’s equation for locating potentially beneficial species possessing local adaptability, climatic plasticity, and interspecific crossability. In doing so, 26 unique species by discrete climate combinations are found, highlighting the presence of unique species to use in adapting potato to changing local climates.

Further, the 20 highest prioritized values belong to diploid species, enforcing the drive to shift into diploid breeding by the potato research community, where introgression of the local climate adaptability traits may be more streamlined.