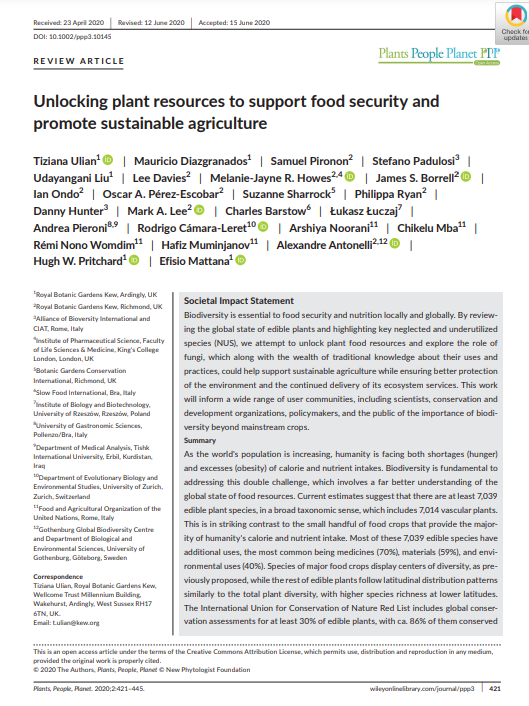 As the world’s population is increasing, humanity is facing both shortages (hunger) and excesses (obesity) of calorie and nutrient intakes. Biodiversity is fundamental to addressing this double challenge, which involves a far better understanding of the global state of food resources. Current estimates suggest that there are at least 7,039 edible plant species, in a broad taxonomic sense, which includes 7,014 vascular plants. This is in striking contrast to the small handful of food crops that provide the majority of humanity’s calorie and nutrient intake. Most of these 7,039 edible species have additional uses, the most common being medicines (70%), materials (59%), and environmental uses (40%).

The International Union for Conservation of Nature Red List includes global conservation assessments for at least 30% of edible plants, with ca. 86% of them conserved ex situ. However, at least 11% of those species recorded are threatened. We highlight multipurpose NUS of plants from different regions of the world, which could be key for a more resilient, sustainable, biodiverse, and community participation-driven new “green revolution.” Furthermore, we explore how fungi could diversify and increase the nutritional value of our diets. NUS, along with the wealth of traditional knowledge about their uses and practices, offer a largely untapped resource to support food security and sustainable agriculture. However, for these natural resources to be unlocked, enhanced collaboration among stakeholders is vital.