Mucuna pruriens, Crotalaria juncea, and chickpea (Cicer arietinum) have the potential for improving productivity of banana-based systems in Eastern Democratic Republic of Congo 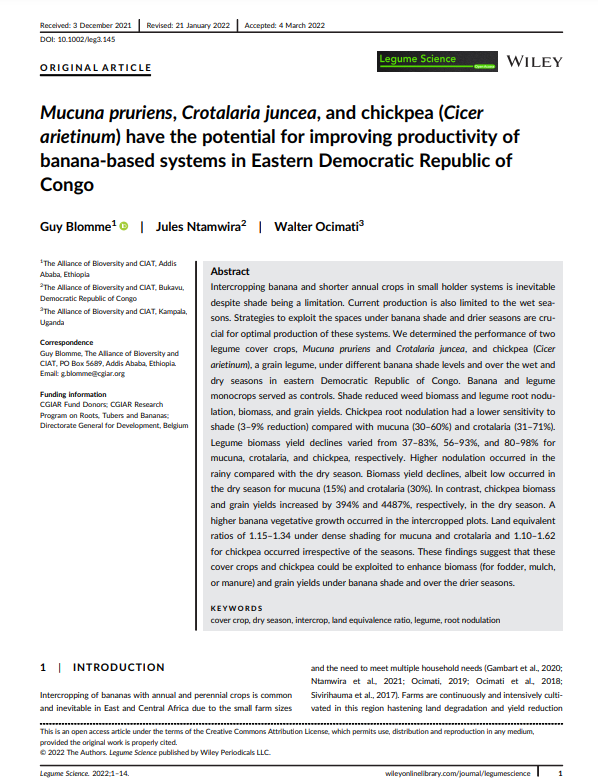 Intercropping banana and shorter annual crops in small holder systems is inevitable despite shade being a limitation. Current production is also limited to the wet seasons. Strategies to exploit the spaces under banana shade and drier seasons are crucial for optimal production of these systems. We determined the performance of two legume cover crops, Mucuna pruriens and Crotalaria juncea, and chickpea (Cicer arietinum), a grain legume, under different banana shade levels and over the wet and dry seasons in eastern Democratic Republic of Congo. Banana and legume monocrops served as controls.

Shade reduced weed biomass and legume root nodu-lation, biomass, and grain yields. Chickpea root nodulation had a lower sensitivity to shade (3–9% reduction) compared with mucuna (30–60%) and crotalaria (31–71%). Legume biomass yield declines varied from 37–83%, 56–93%, and 80–98% for mucuna, crotalaria, and chickpea, respectively. Higher nodulation occurred in the rainy compared with the dry season. Biomass yield declines, albeit low occurred in the dry season for mucuna (15%) and crotalaria (30%). In contrast, chickpea biomass and grain yields increased by 394% and 4487%, respectively, in the dry season. A higher banana vegetative growth occurred in the intercropped plots. Land equivalent ratios of 1.15–1.34 under dense shading for mucuna and crotalaria and 1.10–1.62 for chickpea occurred irrespective of the seasons. These findings suggest that these cover crops and chickpea could be exploited to enhance biomass (for fodder, mulch, or manure) and grain yields under banana shade and over the drier seasons.