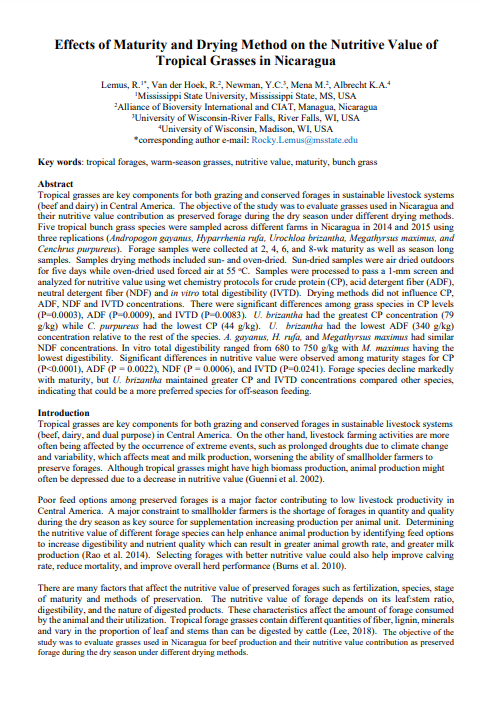 Tropical grasses are key components for both grazing and conserved forages in sustainable livestock systems (beef and dairy) in Central America. The objective of the study was to evaluate grasses used in Nicaragua and their nutritive value contribution as preserved forage during the dry season under different drying methods.

There were significant differences among grass species in CP levels (P=0.0003), ADF (P=0.0009), and IVTD (P=0.0083). U. brizantha had the greatest CP concentration (79 g/kg) while C. purpureus had the lowest CP (44 g/kg). U. brizantha had the lowest ADF (340 g/kg) concentration relative to the rest of the species. A. gayanus, H. rufa, and Megathyrsus maximus had similar NDF concentrations. In vitro total digestibility ranged from 680 to 750 g/kg with M. maximus having the lowest digestibility. Significant differences in nutritive value were observed among maturity stages for CP (P<0.0001), ADF (P = 0.0022), NDF (P = 0.0006), and IVTD (P=0.0241). Forage species decline markedly with maturity, but U. brizantha maintained greater CP and IVTD concentrations compared other species, indicating that could be a more preferred species for off-season feeding.