To standardize by mass of soil or organic carbon? A comparison of permanganate oxidizable carbon (POXC) assay methods 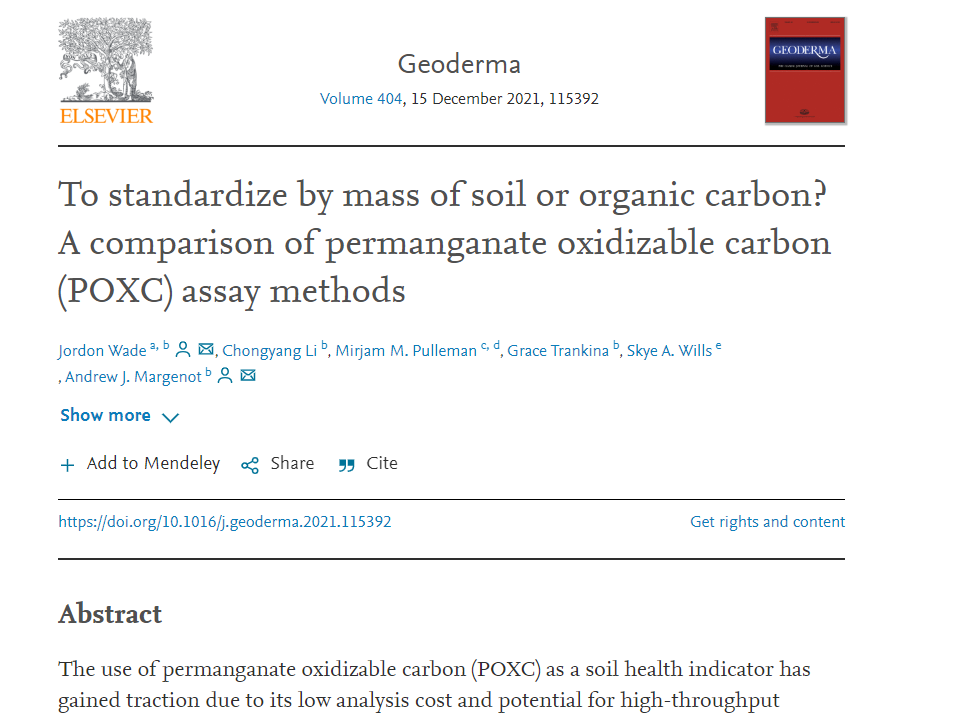 The use of permanganate oxidizable carbon (POXC) as a soil health indicator has gained traction due to its low analysis cost and potential for high-throughput analysis. Permanganate (MnO4−) has long been proposed to fractionate soil organic matter. A methodological alteration was proposed to allow for its use as a rapid soil health indicator (POXC) is to allow the MnO4− to reach with a fixed soil mass, rather than a fixed mass of soil organic carbon (SOC). However, this modification may compromise the robustness of the results by altering the consistency of the stoichiometry in the reduction–oxidation reaction (MnO4− : SOC).

Here we use a diverse set of 69 U.S. soils to evaluate whether using a fixed soil mass (2.5 g) substantively undermines the theoretical requirement of a fixed amount of SOC (15 or 25 mg SOC per sample) per unit of oxidant (MnO4−). We found that the use of a fixed SOC mass entailed a more consistent reduction of MnO4− than a fixed soil mass and also resulted in a greater range of absolute (mg kg−1) and relative POXC values (as a % of SOC) across soils. This broader range of values was not driven by large differences in the amount of MnO4− reduced per unit of SOC analyzed, but rather resulted from normalizing the amount of MnO4− reduced on a soil mass basis.

The underlying distribution of MnO4− reduction did not substantively change, suggesting that the interpretation when comparing relative differences in POXC would similarly be unchanged.

Unexpectedly, the use of a fixed SOC mass decreased the repeatability of the metric relative to the use of a fixed soil mass. Given the current interpretation of POXC, we see few upsides of using fixed SOC mass and several downsides (i.e. lower throughput and decreased reliability), relative to the current use of a fixed soil mass. To minimize unfounded assumptions, we further propose that POXC values be reported strictly as MnO4− reduced, specifically as μmol MnO4− reduced kg−1 soil.

Our results further underscore that the results of POXC assays should be cautiously interpreted. Specifically, interpretations should be qualified by the operationally-defined nature of the POXC assay as an indirectly measured, chemically defined fraction.