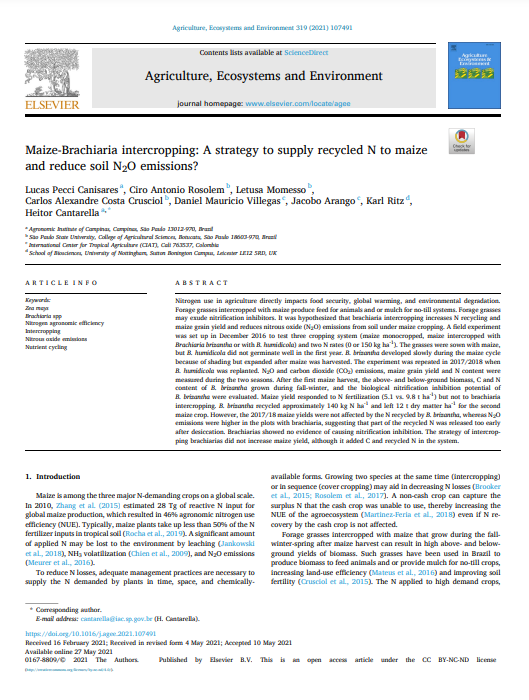 Nitrogen use in agriculture directly impacts food security, global warming, and environmental degradation. Forage grasses intercropped with maize produce feed for animals and or mulch for no-till systems. Forage grasses may exude nitrification inhibitors. It was hypothesized that brachiaria intercropping increases N recycling and maize grain yield and reduces nitrous oxide (N2O) emissions from soil under maize cropping. A field experiment was set up in December 2016 to test three cropping system (maize monocropped, maize intercropped with Brachiaria brizantha or with B. humidicola) and two N rates (0 or 150 kg ha-1).

The grasses were sown with maize, but B. humidicola did not germinate well in the first year. B. brizantha developed slowly during the maize cycle because of shading but expanded after maize was harvested. The experiment was repeated in 2017/2018 when B. humidicola was replanted. N2O and carbon dioxide (CO2) emissions, maize grain yield and N content were measured during the two seasons. After the first maize harvest, the above- and below-ground biomass, C and N content of B. brizantha grown during fall-winter, and the biological nitrification inhibition potential of B. brizantha were evaluated. Maize yield responded to N fertilization (5.1 vs. 9.8 t ha-1) but not to brachiaria intercropping. B. brizantha recycled approximately 140 kg N ha-1 and left 12 t dry matter ha-1 for the second maize crop. However, the 2017/18 maize yields were not affected by the N recycled by B. brizantha, whereas N2O emissions were higher in the plots with brachiaria, suggesting that part of the recycled N was released too early after desiccation. Brachiarias showed no evidence of causing nitrification inhibition. The strategy of intercropping brachiarias did not increase maize yield, although it added C and recycled N in the system.