Evolution of soil fertility research and development in Ethiopia: From reconnaissance to data-mining approaches 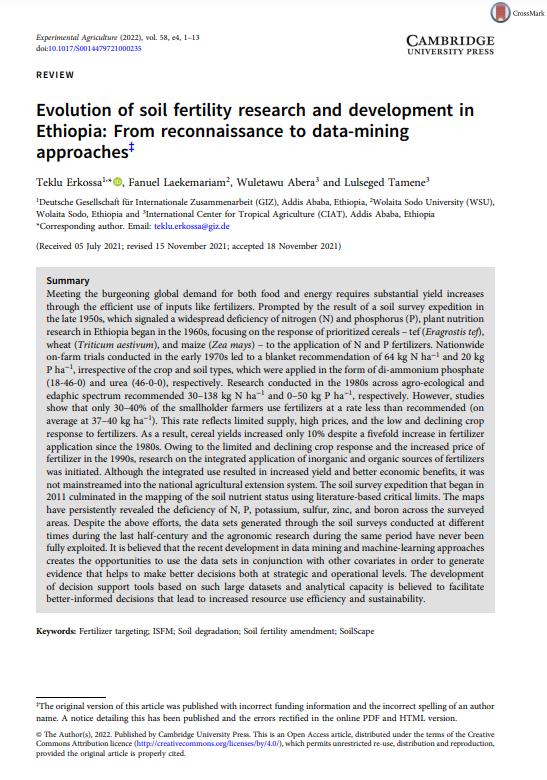 Meeting the burgeoning global demand for both food and energy requires substantial yield increases through the efficient use of inputs like fertilizers.

Prompted by the result of a soil survey expedition in the late 1950s, which signaled a widespread deficiency of nitrogen (N) and phosphorus (P), plant nutrition research in Ethiopia began in the 1960s, focusing on the response of prioritized cereals – tef (Eragrostis tef), wheat (Triticum aestivum), and maize (Zea mays) – to the application of N and P fertilizers. Nationwide on-farm trials conducted in the early 1970s led to a blanket recommendation of 64 kg N ha−1 and 20 kg P ha−1, irrespective of the crop and soil types, which were applied in the form of di-ammonium phosphate (18-46-0) and urea (46-0-0), respectively. Research conducted in the 1980s across agro-ecological and edaphic spectrum recommended 30–138 kg N ha−1 and 0–50 kg P ha−1, respectively. However, studies show that only 30–40% of the smallholder farmers use fertilizers at a rate less than recommended (on average at 37–40 kg ha−1).

This rate reflects limited supply, high prices, and the low and declining crop response to fertilizers. As a result, cereal yields increased only 10% despite a fivefold increase in fertilizer application since the 1980s. Owing to the limited and declining crop response and the increased price of fertilizer in the 1990s, research on the integrated application of inorganic and organic sources of fertilizers was initiated. Although the integrated use resulted in increased yield and better economic benefits, it was not mainstreamed into the national agricultural extension system.

The soil survey expedition that began in 2011 culminated in the mapping of the soil nutrient status using literature-based critical limits. The maps have persistently revealed the deficiency of N, P, potassium, sulfur, zinc, and boron across the surveyed areas. Despite the above efforts, the data sets generated through the soil surveys conducted at different times during the last half-century and the agronomic research during the same period have never been fully exploited. It is believed that the recent development in data mining and machine-learning approaches creates the opportunities to use the data sets in conjunction with other covariates in order to generate evidence that helps to make better decisions both at strategic and operational levels. The development of decision support tools based on such large datasets and analytical capacity is believed to facilitate better-informed decisions that lead to increased resource use efficiency and sustainability.