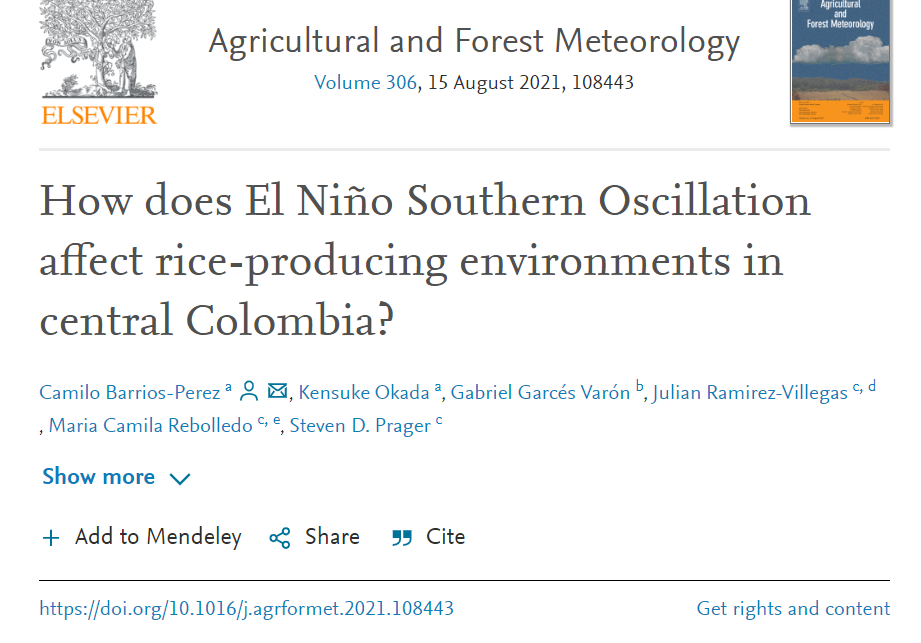 The rice industry plays an important role in the agricultural economy of Colombia and its success dependents largely on weather conditions. Rice farmers, policymakers and other stakeholders thus need to understand and manage the risks associated with climate variability, including those related to El Niño Southern Oscillation (ENSO) – the most important source of variability affecting Colombian climates. The objectives of this study were to (1) assess the ENSO influence on the spatio-temporal variability of agro-climatic conditions (crop water requirements, dry and wet spells, and heatwaves) and rice yield across the central producing region of Colombia; and (2) identify the main agro-climatic factors driving crop yield variability. Results showed that rice irrigation water requirements under positive ENSO phases (El Niño) increased by up to 14% compared to the long-term average. These increases were associated with less total precipitation, more dry days and longer dry spells, together with a greater number of day-and-night heatwave episodes.

During negative phases (La Niña), on the other hand, irrigation requirements decreased by 16% with respect to the long-term average due to longer and more frequent wet spells, and more total precipitation. Analyses of simulated yields indicated that El Niño years reduce crop yield in about 86% of the study region, while La Niña affects 62% of the region positively. The number of heat nights (i.e. nights with minimum temperature > 23°C) during the growing season was the most important agro-climatic factor causing yield losses during ENSO events. Our results represent an important step towards understanding the interaction between climate variability and rice production in Colombia, which is useful for improving climate risk management at local levels.