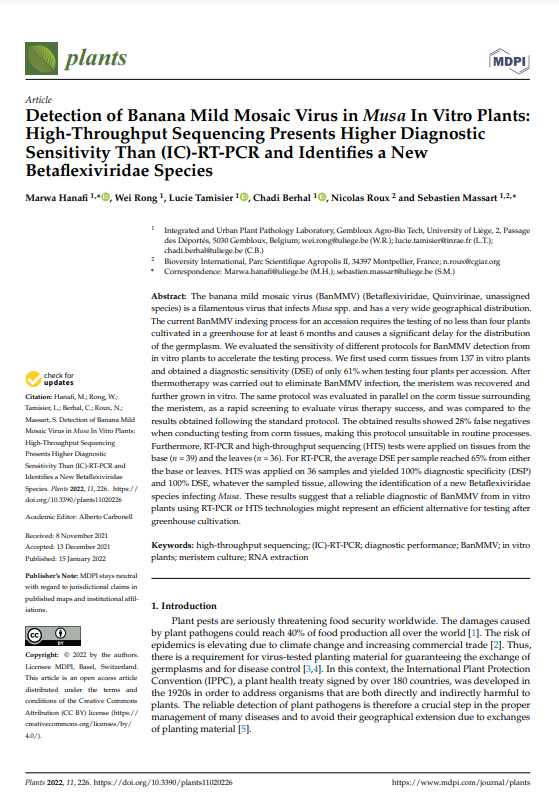 The banana mild mosaic virus (BanMMV) (Betaflexiviridae, Quinvirinae, unassigned species) is a filamentous virus that infects Musa spp. and has a very wide geographical distribution. The current BanMMV indexing process for an accession requires the testing of no less than four plants culti-vated in a greenhouse for at least 6 months and causes a significant delay for the distribution of the germplasm. We evaluated the sensitivity of different protocols for BanMMV detection from in vitro plants to accelerate the testing process. We first used corm tissues from 137 in vitro plants and obtained a diagnostic sensitivity (DSE) of only 61% when testing four plants per accession. After thermotherapy was carried out to eliminate BanMMV infection, the meristem was recovered and further grown in vitro. The same protocol was evaluated in parallel on the corm tissue surrounding the meristem, as a rapid screening to evaluate virus therapy success, and was compared to the results obtained following the standard protocol. The obtained results showed 28% false negatives when conducting testing from corm tissues, making this protocol unsuitable in routine processes. Furthermore, RT-PCR and high-throughput sequencing (HTS) tests were applied on tissues from the base (n = 39) and the leaves (n = 36). For RT-PCR, the average DSE per sample reached 65% from either the base or leaves. HTS was applied on 36 samples and yielded 100% diagnostic specificity (DSP) and 100% DSE, whatever the sampled tissue, allowing the identification of a new Betaflex-iviridae species infecting Musa. These results suggest that a reliable diagnostic of BanMMV from in vitro plants using RT-PCR or HTS technologies might represent an efficient alternative for testing after greenhouse cultivation.