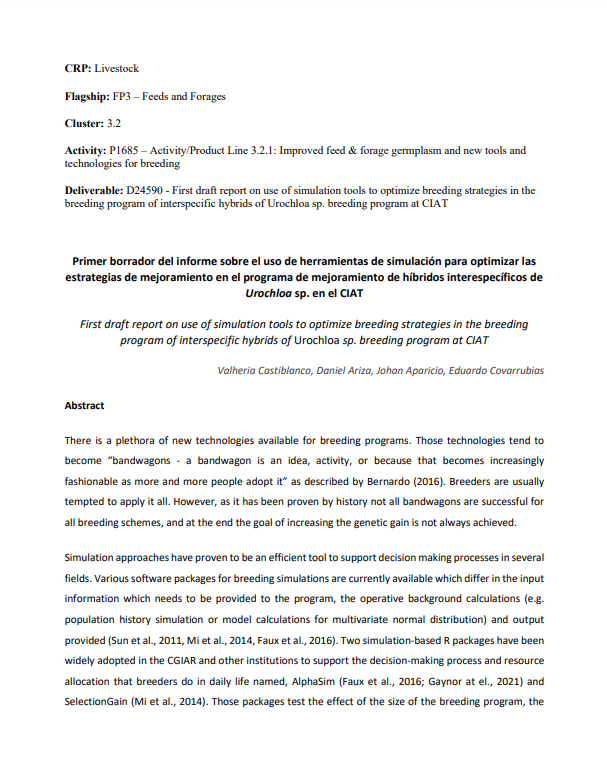 There is a plethora of new technologies available for breeding programs. Those technologies tend to become “bandwagons – a bandwagon is an idea, activity, or because that becomes increasingly fashionable as more and more people adopt it” as described by Bernardo (2016). Breeders are usually tempted to apply it all. However, as it has been proven by history not all bandwagons are successful for all breeding schemes, and at the end the goal of increasing the genetic gain is not always achieved.
Simulation approaches have proven to be an efficient tool to support decision making processes in several fields. Various software packages for breeding simulations are currently available which differ in the input information which needs to be provided to the program, the operative background calculations (e.g. population history simulation or model calculations for multivariate normal distribution) and output provided (Sun et al., 2011, Mi et al., 2014, Faux et al., 2016).

Two simulation-based R packages have been widely adopted in the CGIAR and other institutions to support the decision-making process and resource allocation that breeders do in daily life named, AlphaSim (Faux et al., 2016; Gaynor at el., 2021) and SelectionGain (Mi et al., 2014). Those packages test the effect of the size of the breeding program, the number of breeding and testing stages, and the effect of accuracy of the trials and selection intensity in the expected genetic gain (GG). In the description of the different schemes tested, new technologies can also be represented, being able to predict the effect of those technologies in the genetic gain, which in turn, can make the waves of bandwagons less acute and allocation of funding also more effective.

The Brachiaria intespecific breeding program at CIAT, with nearly 30 years of experience, is unique by its biology (polyploid and apomictic) and by being an example of several new technologies successfully used (induced polyploidy, Marker assisted selection (MAS), clonal propagation, Near Infrared Spectophotometry (NIRS), drone-based image analysis within others). The program releases apomictic hybrids by applying a scheme of recurrent selection in the female parent pool while maintaining the apomictic tester fixed, also known as recurrent selection based on specific combining ability (RS-SCA; Hull 1945; Miles 2007). The apomictic male parent pool (Brachiaria decumbens) has been difficult to improve due to the unavailability of a B. decumbens sexual tetraploid individual that enables the crosses for that pool, respecting the heterotic pattern.

In this study we used simulation-based R packages to test various possible modifications to the current breeding scheme being applied at the Urochloa intespecific breeding program at CIAT. We explored the impact in the genetic gain given by the possible migration from RS-SCA, to reciprocal recurrent selection (RRS), considering the challenges in logistics and population size. More specifically, the refreshing of the apomictic tester in each future heterotic pool and the hybrid formation under various sizes of the diallel crossing design.

With a 20 years burn-in period used as baseline, followed by 30 year evaluation period, the simulations revealed that the first 15 years the current breeding scheme (RS-SCA) offers higher rates of GG, but after that, this scheme is surpass by all treatments with RRS. We hypothesize, in the RS-SCA the genetic variability is exhausted during the first 15 years, while the RRS provides double genetic variability to exploit. We discuss the challenges on the application of this new approach at the light of the logistics and the lack of a sexual tetraploid individual for the crosses in the B. decumbens heterotic pool.

*Currently the study has been finished and the document with all the details is being written, then we plan to submit for peer review before the end of 2021.