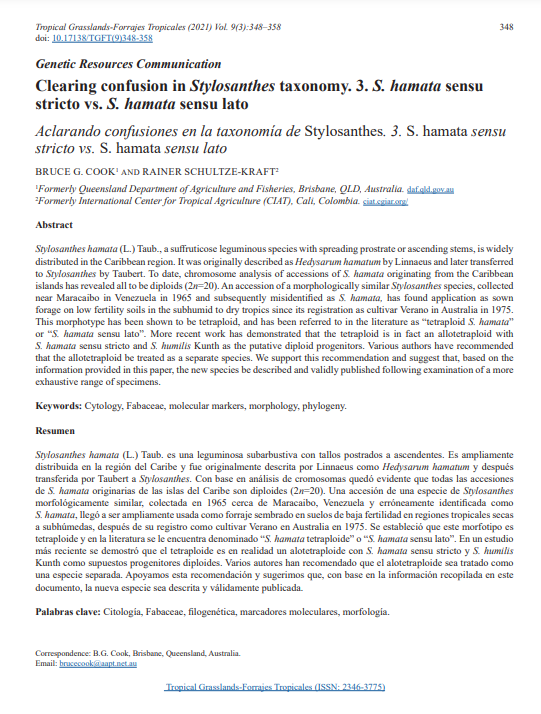 Stylosanthes hamata (L.) Taub., a suffruticose leguminous species with spreading prostrate or ascending stems, is widely distributed in the Caribbean region. It was originally described as Hedysarum hamatum by Linnaeus and later transferred to Stylosanthes by Taubert. To date, chromosome analysis of accessions of S. hamata originating from the Caribbean islands has revealed all to be diploids (2n=20). An accession of a morphologically similar Stylosanthes species, collected near Maracaibo in Venezuela in 1965 and subsequently misidentified as S. hamata, has found application as sown forage on low fertility soils in the subhumid to dry tropics since its registration as cultivar Verano in Australia in 1975. This morphotype has been shown to be tetraploid, and has been referred to in the literature as “tetraploid S. hamata” or “S. hamata sensu lato”. More recent work has demonstrated that the tetraploid is in fact an allotetraploid with S. hamata sensu stricto and S. humilis Kunth as the putative diploid progenitors. Various authors have recommended that the allotetraploid be treated as a separate species. We support this recommendation and suggest that, based on the information provided in this paper, the new species be described and validly published following examination of a more exhaustive range of specimens.