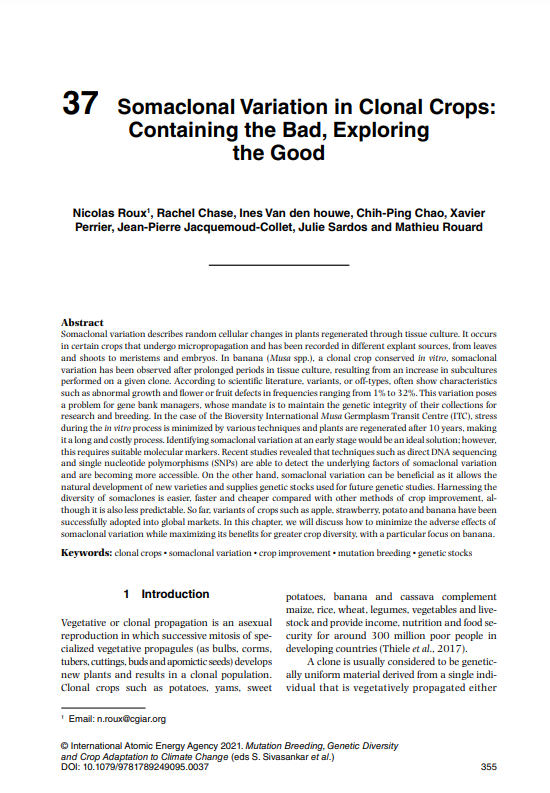 Somaclonal variation describes random cellular changes in plants regenerated through tissue culture. It occurs in certain crops that undergo micropropagation and has been recorded in different explant sources, from leaves and shoots to meristems and embryos. In banana (Musa spp.), a clonal crop conserved in vitro, somaclonal variation has been observed after prolonged periods in tissue culture, resulting from an increase in subcultures performed on a given clone. According to scientific literature, variants, or off-types, often show characteristics such as abnormal growth and flower or fruit defects in frequencies ranging from 1% to 32%. This variation poses a problem for gene bank managers, whose mandate is to maintain the genetic integrity of their collections for research and breeding. In the case of the Bioversity International Musa Germplasm Transit Centre (ITC), stress
during the in vitro process is minimized by various techniques and plants are regenerated after 10 years, making it a long and costly process. Identifying somaclonal variation at an early stage would be an ideal solution; however, this requires suitable molecular markers. Recent studies revealed that techniques such as direct DNA sequencing and single nucleotide olymorphisms (SNPs) are able to detect the underlying factors of somaclonal variation and are becoming more accessible. On the other hand, somaclonal variation can be beneficial as it allows the natural development of new varieties and supplies genetic stocks used for future genetic studies. Harnessing the diversity of somaclones is easier, faster and cheaper compared with other methods of crop improvement, al though it is also less predictable. So far, variants of crops such as apple, strawberry, potato and banana have been successfully adopted into global markets. In this chapter, we will discuss how to minimize the adverse effects of somaclonal variation while maximizing its benefits for greater crop diversity, with a particular focus on banana.