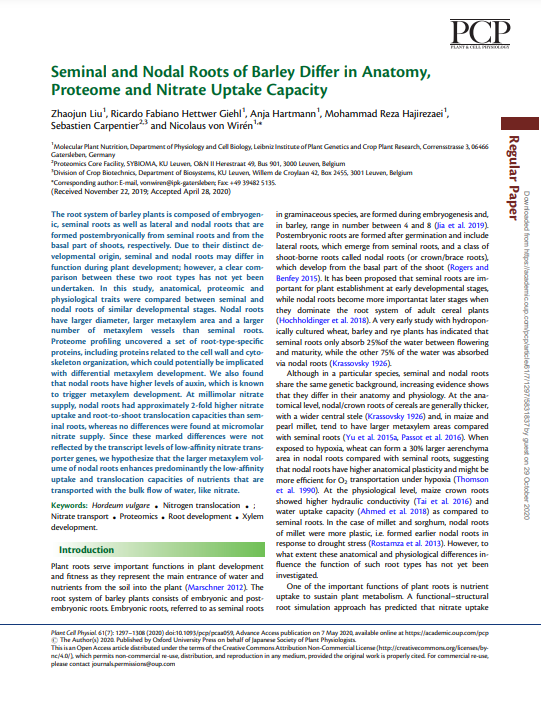 The root system of barley plants is composed of embryogenic, seminal roots as well as lateral and nodal roots that are formed postembryonically from seminal roots and from the basal part of shoots, respectively.

Due to their distinct developmental origin, seminal and nodal roots may differ in function during plant development; however, a clear comparison between these two root types has not yet been undertaken. In this study, anatomical, proteomic and physiological traits were compared between seminal and nodal roots of similar developmental stages. Nodal roots have larger diameter, larger metaxylem area and a larger number of metaxylem vessels than seminal roots. Proteome profiling uncovered a set of root-type-specific proteins, including proteins related to the cell wall and cytoskeleton organization, which could potentially be implicated with differential metaxylem development.

We also found that nodal roots have higher levels of auxin, which is known to trigger metaxylem development. At millimolar nitrate supply, nodal roots had approximately 2-fold higher nitrate uptake and root-to-shoot translocation capacities than seminal roots, whereas no differences were found at micromolar nitrate supply. Since these marked differences were not reflected by the transcript levels of low-affinity nitrate transporter genes, we hypothesize that the larger metaxylem volume of nodal roots enhances predominantly the low-affinity uptake and translocation capacities of nutrients that are transported with the bulk flow of water, like nitrate.