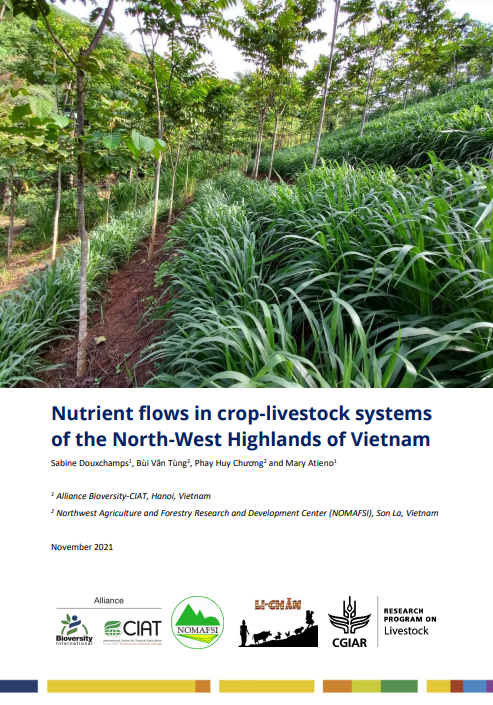 In Son La province, Mai Son district, low soil fertility is one of the main constraints for agricultural production. We quantified nutrient balances and recycling using nitrogen (N) as modelling currency in smallholder crop-livestock farms. Six farmers with different levels of access to roads and markets were interviewed on their assets, agricultural production, and nutrient management practices. Nitrogen balances were positive in the high and middle access farms, with 35 to 177 kgN/ha. In contrast, the balances were negative in the most remote farms, with -18 kgN/ha in average. The application of mineral fertilizer was a key game changer, accounting for an average of 83% of the N inputs across the six farms. Burning of crop residues contributed strongly to nutrient losses, especially on remote farms.

The nitrogen recycling intensity was 13% on average, expect for one farm which produced a lot of its own livestock feed and reached a nitrogen recycling intensity (NRI) of 64%. Farms with remote access would not apply nutrient management techniques like recycling of crop residues as feed or as mulch and using animal manure as fertilizer. The use of organic inputs should be encouraged and burning should be avoided, especially on slopping lands. Legume species should be better integrated in the system, for example as multipurpose forages. Constraints in adoption of these measures should be carefully studied, as well as the long-term cost-benefit ratio. Preliminary implementation of soil erosion control and soil fertility improvement techniques in the region are promising and should be supported by local authorities and extension services.