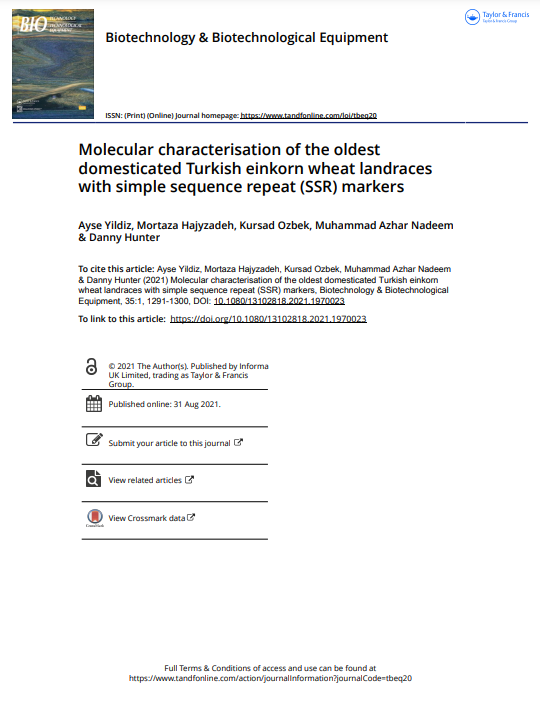 Einkorn (Triticum monococcum L. ssp. monococcum) is an ancient diploid wheat species with many useful traits and used as a wheat gene discovery model. In this research, a total of 41 diploid and tetraploid wheat accessions were tested using simple sequence repeat (SSR) markers. A total of 33 genotypes of T. monococcum along with four genotypes each of tetraploid wheat (T. dicoccon and T. durum) were used as plant material. The analysis utilized 10 polymorphic markers, including a total number of 41 alleles with an average frequency of 4.1 alleles per locus during exploration of the level of genetic variations. Various diversity analyses, which are the effective number of alleles (Ne), gene diversity (h), Polymorphic Information Content (PIC), and Shannon’s information index (I), were performed for 10 ‘A’ genome wheat SSR markers. The results showed a narrow variation in einkorn genotypes, supported by Analysis of Molecular Variance (AMOVA), with 66% maximum variation in all genotypes. The structure analysis divided the whole germplasm into two populations.

A dendrogram was constructed to determine the genetic similarities using the unpaired group method with arithmetic averages (UPGMA), which separated tetraploid wheat from other genotypes/accessions. Principal Coordinate Analysis (PCoA) co-supported the clustering of UPGMA and structure by differentiating the diploid and tetraploid wheat. These findings will help understand the genetic relationships among these wheat accessions and their use in breeding programs in the future works.