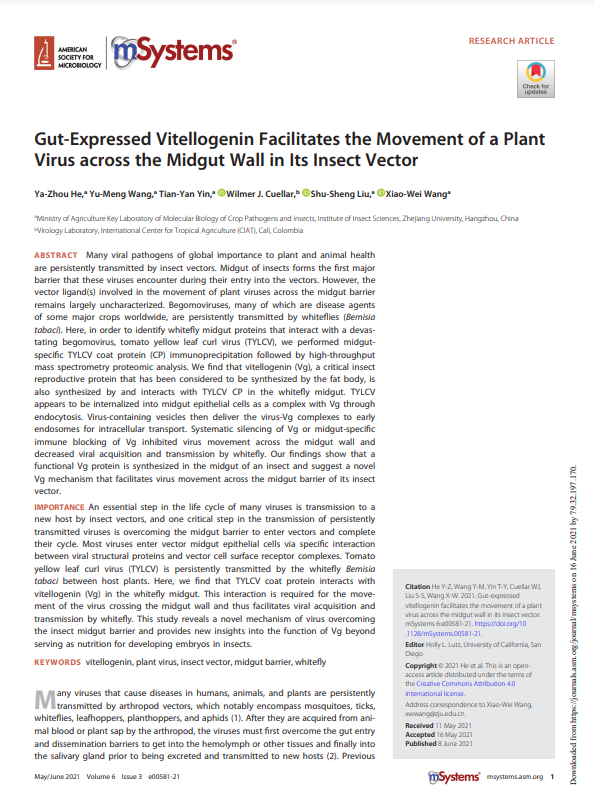 Many viral pathogens of global importance to plant and animal health are persistently transmitted by insect vectors. Midgut of insects forms the first major barrier that these viruses encounter during their entry into the vectors. However, the vector ligand(s) involved in the movement of plant viruses across the midgut barrier remains largely uncharacterized. Begomoviruses, many of which are disease agents of some major crops worldwide, are persistently transmitted by whiteflies (Bemisia tabaci). Here, in order to identify whitefly midgut proteins that interact with a devastating begomovirus, tomato yellow leaf curl virus (TYLCV), we performed midgut-specific TYLCV coat protein (CP) immunoprecipitation followed by high-throughput mass spectrometry proteomic analysis. ù

We find that vitellogenin (Vg), a critical insect reproductive protein that has been considered to be synthesized by the fat body, is also synthesized by and interacts with TYLCV CP in the whitefly midgut. TYLCV appears to be internalized into midgut epithelial cells as a complex with Vg through endocytosis. Virus-containing vesicles then deliver the virus-Vg complexes to early endosomes for intracellular transport. Systematic silencing of Vg or midgut-specific immune blocking of Vg inhibited virus movement across the midgut wall and decreased viral acquisition and transmission by whitefly. Our findings show that a functional Vg protein is synthesized in the midgut of an insect and suggest a novel Vg mechanism that facilitates virus movement across the midgut barrier of its insect vector.