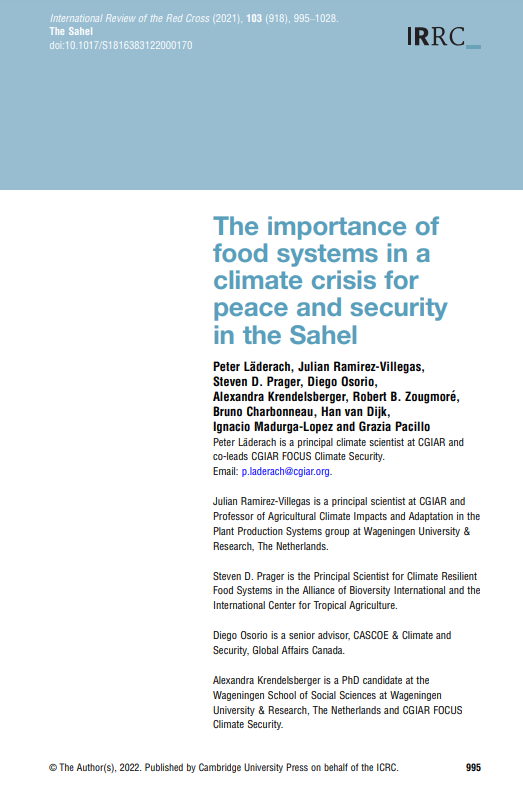 Conflicts are increasingly analysed as exhibiting a stealth complexity in which triggers and consequences are intricately linked to climate, environmental degradation and the struggle to control a finite pool of natural resources. The climate crisis is a multifaceted reality and, against this background, many pressing priorities compete with each other. The disruptive effect of climate variability and change on food systems is particularly acute and constitutes a direct and tangible threat to livelihoods globally. The objective of this paper is to demonstrate and discuss the importance of food systems under a climate crisis in exacerbating conflicts in the Sahelian region and propose interventions beyond and complementary to the usual military and security solutions. We demonstrate for the Sahel that (i) climate hazards are frequent and exposure to climate variability is high, (ii) hotspots of high climate variability and conflict exist, and (iii) impact pathways by which climate exacerbates food systems that can lead to conflicts are documented in the literature. While these three findings suggest clear links between conflict and climate, we find that (iv) current peace indices do not include climate and food systems indicators and therefore provide an uncomplete picture, and (v) food systems programming for climate adaptation has so far not explicitly considered peace and security outcomes. Furthermore, we propose that food systems programming that truly tackles the climate crisis should take more explicit account of peace and security outcomes in conflict-affected areas.