Flood hazard in a semi-closed basin in northern Ethiopia: Impact and resilience 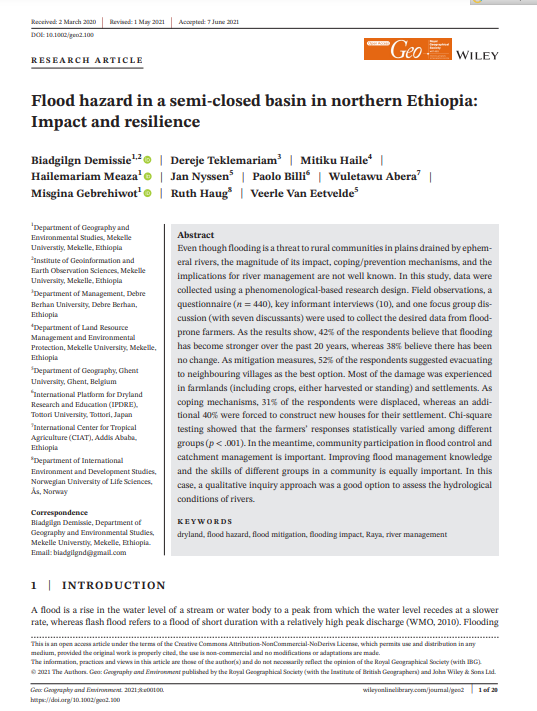 Even though flooding is a threat to rural communities in plains drained by ephem-eral rivers, the magnitude of its impact, coping/prevention mechanisms, and the implications for river management are not well known. In this study, data were collected using a phenomenological- based research design. Field observations, a questionnaire (n = 440), key informant interviews (10), and one focus group dis-cussion (with seven discussants) were used to collect the desired data from flood- prone farmers. As the results show, 42% of the respondents believe that flooding has become stronger over the past 20 years, whereas 38% believe there has been no change. As mitigation measures, 52% of the respondents suggested evacuating to neighbouring villages as the best option. Most of the damage was experienced in farmlands (including crops, either harvested or standing) and settlements. As coping mechanisms, 31% of the respondents were displaced, whereas an addi-tional 40% were forced to construct new houses for their settlement. Chi- square testing showed that the farmers’ responses statistically varied among different groups (p < .001). In the meantime, community participation in flood control and catchment management is important. Improving flood management knowledge and the skills of different groups in a community is equally important. In this case, a qualitative inquiry approach was a good option to assess the hydrological conditions of rivers.