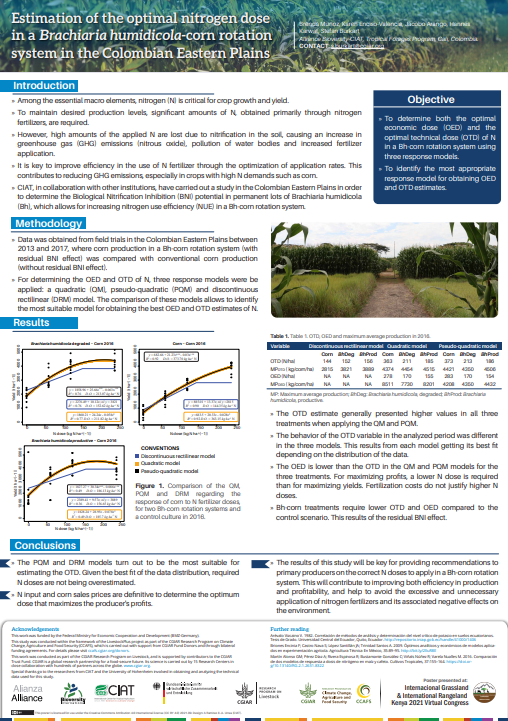 Improving nitrogen use efficiency (NUE) by optimizing the N fertilizer application dose is one way to reduce greenhouse gas emissions in agriculture and livestock production, especially in higher demanding crops such as corn. Taking a Brachiaria humidicola (Bh)-corn rotation system in the Colombian Eastern Plains, we seek to determine both the optimal economic dose (OED) and the optimal technical dose (OTD) of N, which allow to maximize income at producer level and minimize environmental impacts. This particular rotation system was chosen as research subject given the presence of the residual effect of Biological Nitrogen Inhibition (BNI) in permanent lots of Bh, which has positive impacts on corn production such as increased yields and better N efficiency.

The data for this study was obtained from trials conducted between 2013 and 2017, where corn production in a Bh-corn rotation system (with residual BNI effect) was compared with conventional corn production (without residual BNI effect). For determining the OED and OTD of N, three response models were applied: a pseudo-quadratic model (PQM), a quadratic model (QM) and a discontinuous-rectilinear model (DRM). The results show that the PQM and DRM models turn out to be the most suitable for estimating the OTD producing a better fit for the data, thus the required N doses are not overestimated. Bh-corn treatments require lower OTD and OED compared to the control scenario, which results from the residual BNI effect. The OED is lower than the OTD in the QM and PQM models for the three treatments. Thus, for maximizing profits a lower N dose is required. Both N input and corn sales price variables determine the optimum dose for maximizing the producer’s profits. In general, estimating the correct doses of N in a Bh-corn rotation system contributes to improving both efficiency in production and profitability, helping to avoid excessive application of N fertilizers and its associated negative effects on the environment.