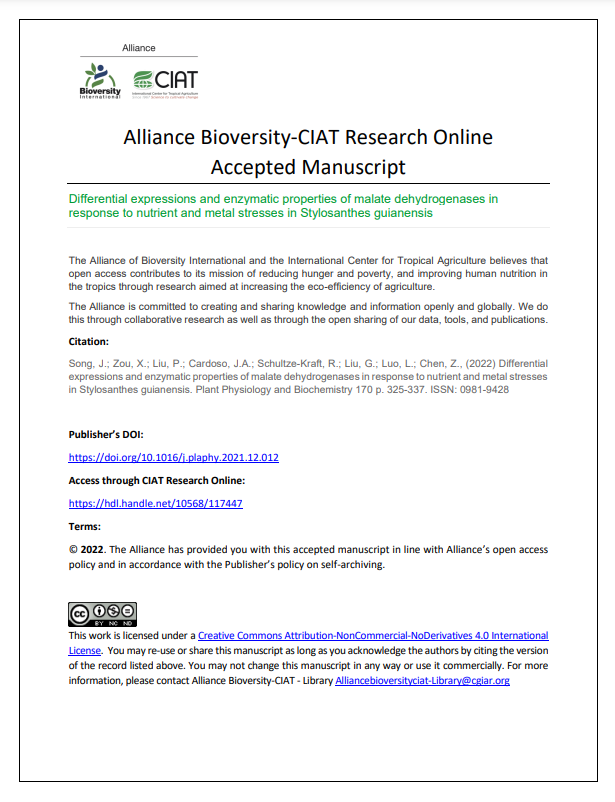 Malate dehydrogenase (MDH, EC 1.1.1.37) is a key enzyme that catalyzes a reversible NAD-dependent dehydrogenase reaction from oxaloacetate (OAA) to malate. Although MDH has been documented to participate in cellular metabolism and redox homeostasis in plants, the roles of MDH members in the tropical legume Stylosanthes guianensis (stylo) remain less definitive. In this study, except SgMDH1 that had been previously characterized, six novel MDH genes were isolated from stylo and were then designated as SgMDH2 to SgMDH7. All of the SgMDH proteins possessed the common features of NAD binding, dimerization interface and substrate binding sites. Expression analysis showed that three SgMDHs exhibited preferential expressions in leaves, and one SgMDH was mainly expressed in roots. Furthermore, SgMDHs were regulated by nutrient deficiencies in stylo roots, especially for phosphorus (-P) and potassium (-K) deficiencies. Differential responses of SgMDHs to trace metal stress and heavy metal toxicity were observed in stylo roots, suggesting the involvement of SgMDHs in the response of stylo to metal stresses. The six novel SgMDHs were subsequently expressed and purified from Escherichia coli to analyze their biochemical properties. Although SgMDHs exhibited variations in subcellular localizations, each SgMDH protein displayed a high level of catalytic efficiency towards OAA and NADH but a low level of catalytic efficiency towards malate and NAD+. In addition, the activities of recombinant SgMDH proteins were pH-dependent and temperature-sensitive, and exhibited differential regulations by various metal ions. These results together suggest the potential roles of SgMDHs in stylo coping with nutrient and metal stresses.