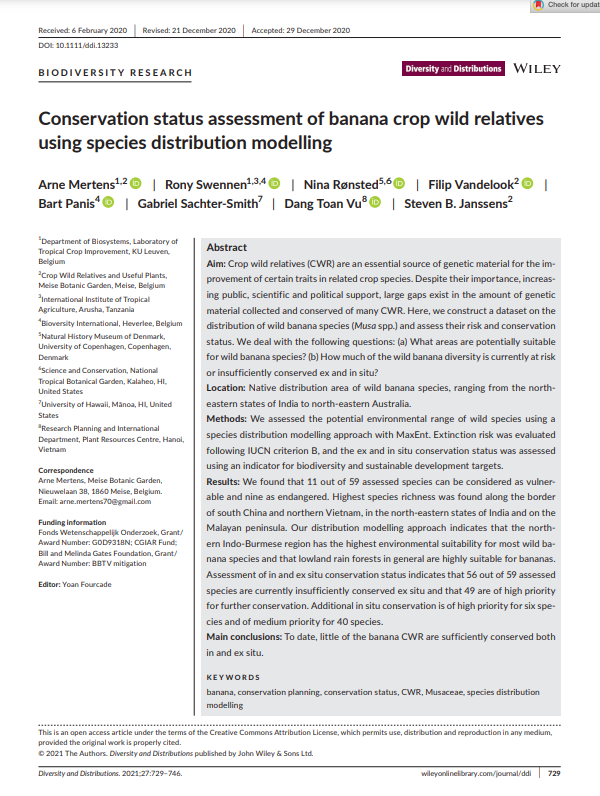 Aim: Crop wild relatives (CWR) are an essential source of genetic material for the improvement of certain traits in related crop species. Despite their importance, increasing public, scientific and political support, large gaps exist in the amount of genetic material collected and conserved of many CWR. Here, we construct a dataset on the distribution of wild banana species (Musa spp.) and assess their risk and conservation status. We deal with the following questions: (a) What areas are potentially suitable for wild banana species? (b) How much of the wild banana diversity is currently at risk or insufficiently conserved ex and in situ?

Methods: We assessed the potential environmental range of wild species using a species distribution modelling approach with MaxEnt. Extinction risk was evaluated following IUCN criterion B, and the ex and in situ conservation status was assessed using an indicator for biodiversity and sustainable development targets.

Results: We found that 11 out of 59 assessed species can be considered as vulnerable and nine as endangered. Highest species richness was found along the border of south China and northern Vietnam, in the north-eastern states of India and on the Malayan peninsula. Our distribution modelling approach indicates that the northern Indo-Burmese region has the highest environmental suitability for most wild banana species and that lowland rain forests in general are highly suitable for bananas. Assessment of in and ex situ conservation status indicates that 56 out of 59 assessed species are currently insufficiently conserved ex situ and that 49 are of high priority for further conservation. Additional in situ conservation is of high priority for six species and of medium priority for 40 species.

Main conclusions: To date, little of the banana CWR are sufficiently conserved both in and ex situ.