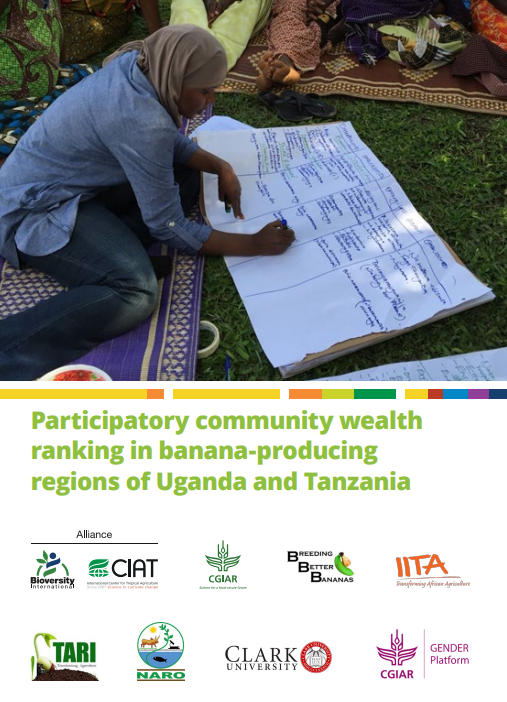 The report describes the approach and results of community wealth ranking (CWR) exercises conducted in 2015-2016 to ascertain the wealth groups and their characteristics of selected banana-producing communities in two regions of Uganda and four of Tanzania. The CWR information gathered was aimed at informing current and future banana breeding initiatives in and
beyond the study areas. Participatory community wealth ranking exercises were conducted through focus group discussions (FGDs) within six selected districts. Based on their perception of others in their community, the farmers were asked to characterize their community’s wealth groups by assets, household and socio-economic characteristics, demographic characteristics, agricultural production practices, access to markets and access to agricultural extension services. They described each group according to similarities in characteristics and their proximity to the community’s perceived poverty line.

These CWR exercises provide community-/villagespecific information that can be used for the dissemination of new banana cultivars and other research or development initiatives that target the poorest, marginalized and vulnerable members of banana-growing communities in sub-Saharan Africa. Importantly, our findings highlight the persistent intergenerational cycle of poverty, indicating the need to re-evaluate social protection schemes, poverty reduction initiatives and community development programmes that have been and continue to be implemented in these communities for decades.