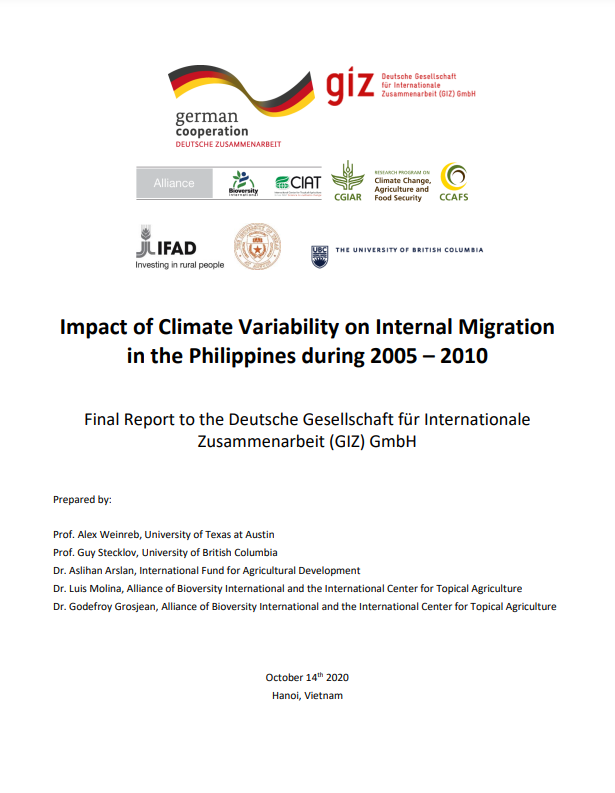 Climate-migration nexus has been attracting increasing scholarly attention in the last decades. The various manifestations of climate change including extreme events that are expected to get more frequent and more intense, and slow-onset changes that increasingly affect livelihoods in a context of international climate coordination failure add fuel to the fire.

Countries in South-East Asia are among the most vulnerable to climate change, and future climate scenarios predict increases in multiple indicators, including temperatures (average, minimum and maximum), annual precipitation, number of consecutive too wet and dry days, among others. Understanding how these changes may shape human mobility is key to effective policy design to protect livelihoods and establish migration as a choice rather than necessity.

This report contributes to the discourse on climate change and internal migration linkages in the Philippines in three important ways.

First, we use data from the latest census available (10% sample from 2010 census) to assess more recent relationships between climate change and migration than found in the robust literature to date. Given the highly dynamic nature of climate-migration nexus, as well as the structural and rural transformation in the country shaping migration, more up to date understanding of these linkages is crucial.

Second, we use a large set of climate change indicators selected by a climate variability expert team and capture both extreme and slow-onset events at high spatial and temporal resolution.

Third, by conducting analyses at different levels (municipality, migration streams and individual) and applying a livelihoods adaptation framework (controlling for a large set of migration drivers in addition to the climate variables) we identify linkages that can be used as policy entry points at different levels.