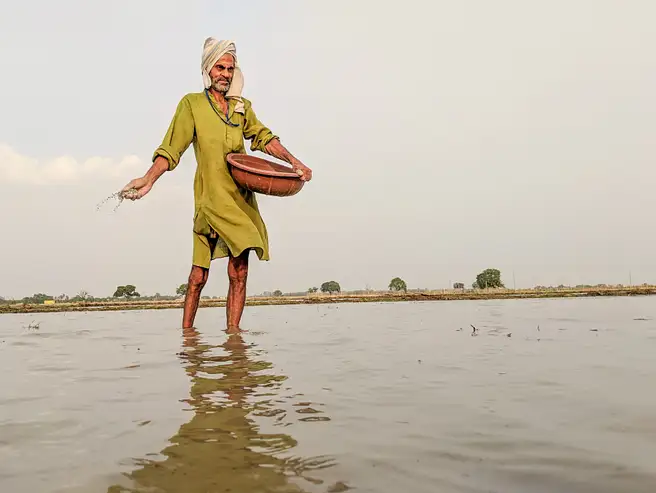 Among the inputs needed for a healthy soil, nitrogen is unique because it originates from the atmosphere. How it moves from the air to the ground is governed in part by a process called biological nitrogen fixation (BNF), which is catalyzed by specific types of bacteria.

Nitrogen supply is frequently the second most limiting factor after water availability constraining crop growth and so there is great farmer demand for accessible sources of nitrogen, such as synthetic nitrogen in fertilizer. This increasing demand has continued as new cereal varieties with higher genetic yield potential are being released in efforts to feed the world’s growing population.

Currently, the primary source for nitrogen is synthetic, delivered through fertilizers. Synthetic nitrogen revolutionized cereal crop (e.g., wheat, maize, and rice) production by enhancing growth and grain yield as it eliminated the need to specifically allocate land for soil fertility rejuvenation during crop rotation. However, synthetic nitrogen is not very efficient, often causing excess application, which leads to deleterious forms, including ammonia, nitrate, and nitrogen oxides escaping into the surrounding ecosystem, resulting in a myriad of negative impacts on the environment and human health. Nitrogen loss from fertilizer is responsible for a nearly 20% increase in atmospheric nitrous oxide since the industrial revolution. Notably, more nitrogen from human activities, including agriculture, has been released to the environment than carbon dioxide during recent decades, leading climate scientists to consider the possibility that nitrogen might replace carbon as a prime driver of climate change.

As agricultural systems become more intensive regarding inputs and outputs, synthetic nitrogen has become increasingly crucial, but there are still extensive areas in the world that cannot achieve food and nutrition security because of a lack of nitrogen.

“This, together with increasing and changing dietary demands, shows that the future demand for nitrogen will substantially grow to meet the anticipated population of 9.7 billion people by the middle of the century,” said J.K. Ladha, adjunct professor in the Department of Plant Sciences at University of California, Davis, and lead author of the study.

Before the synthetic nitrogen, the primary source of agricultural nitrogen was gathered through BNF as bacteria living underground that convert atmospheric nitrogen into nitrogen that can be utilized by crops. Therefore, legumes are often employed as a cover crop in rotating fields to replenish nitrogen stocks; their root systems are hospitable for these nitrogen producing bacteria to thrive.

“There are ways in which BNF could be a core component of efforts to build more sustainable and regenerative agroecosystems to meet nitrogen demand with lower environmental footprints,” said Timothy Krupnik, Senior System Agronomist at CIMMYT in Dhaka, Bangladesh.

Plant scientists have often hypothesized that the ultimate solution for solving the ever-growing nitrogen supply challenge is to confer cereals like wheat, maize, rice, with their own capacity for BNF. Recent breakthroughs in the genomics of BNF, as well as improvements in the understanding how legumes and nitrogen bacteria interact, have opened new avenues to tackle this problem much more systematically.

“Enabling cereal crops to capture their own nitrogen is a long-standing goal of plant biologists and is referred to as the holy grail of BNF research,” said P.M. Reddy, Senior Fellow at The Energy Research Institute, New Delhi. “The theory is that if cereal crops can assemble their own BNF system, the crop’s internal nitrogen supply and demand can be tightly regulated and synchronized.”

The study examined four methods currently being employed to establish systems within cereal crops to capture and use their own nitrogen, each with their advantages and limitations. One promising method involves identifying critical plant genes that perceive and transmit nitrogen-inducing signals in legumes. Integrating these signal genes into cereal crops might allow them to construct their own systems for BNF.

“Our research highlights how BNF will need to be a core component of efforts to build more sustainable agroecosystems,” said Mark Peoples, Honorary Fellow at The Commonwealth Scientific and Industrial Research Organisation (CSIRO), Canberra, Australia. “To be both productive and sustainable, future cereal cropping systems will need to better incorporate and leverage natural processes like BNF to mitigate the corrosive environmental effects of excess nitrogen leaking into our ecosystems.”

Besides the efforts to bring BNF to cereals, there are basic agronomic management tools that can shift focus from synthetic to BNF nitrogen.

“Encouraging more frequent use of legumes in crop rotation will increase diversification and the flow of key ecosystem services, and would also assist the long-term sustainability of cereal-based farming systems­,” said Krupnik.