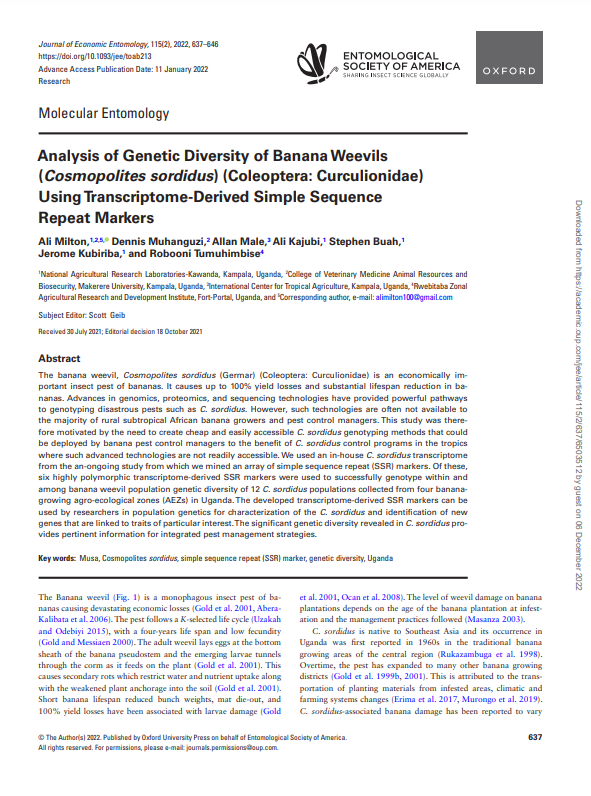 The banana weevil, Cosmopolites sordidus (Germar) (Coleoptera: Curculionidae) is an economically important insect pest of bananas. It causes up to 100% yield losses and substantial lifespan reduction in bananas. Advances in genomics, proteomics, and sequencing technologies have provided powerful pathways to genotyping disastrous pests such as C. sordidus. However, such technologies are often not available to the majority of rural subtropical African banana growers and pest control managers. This study was therefore motivated by the need to create cheap and easily accessible C. sordidus genotyping methods that could be deployed by banana pest control managers to the benefit of C. sordidus control programs in the tropics where such advanced technologies are not readily accessible. We used an in-house C. sordidus transcriptome from the an-ongoing study from which we mined an array of simple sequence repeat (SSR) markers. Of these, six highly polymorphic transcriptome-derived SSR markers were used to successfully genotype within and among banana weevil population genetic diversity of 12 C. sordidus populations collected from four banana-growing agro-ecological zones (AEZs) in Uganda. The developed transcriptome-derived SSR markers can be used by researchers in population genetics for characterization of the C. sordidus and identification of new genes that are linked to traits of particular interest. The significant genetic diversity revealed in C. sordidus provides pertinent information for integrated pest management strategies.