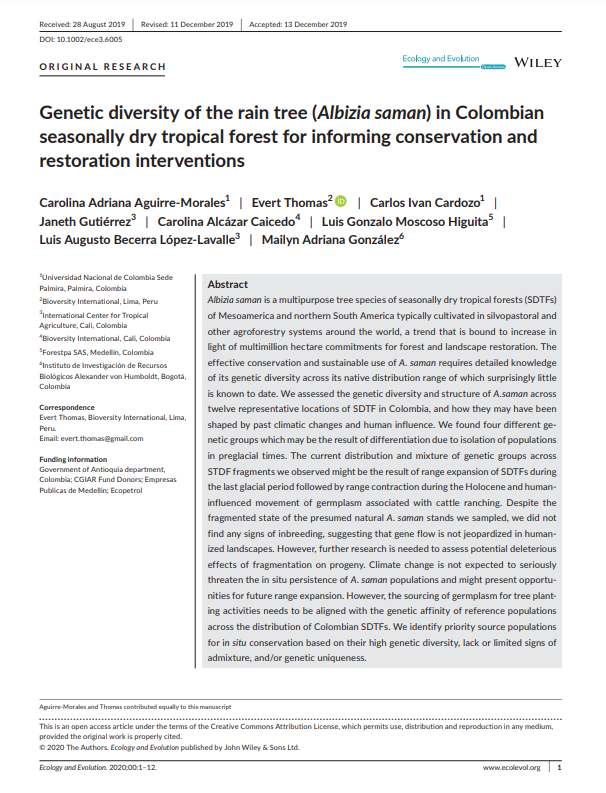 Albizia saman is a multipurpose tree species of seasonally dry tropical forests (SDTFs) of Mesoamerica and northern South America typically cultivated in silvopastoral and other agroforestry systems around the world, a trend that is bound to increase in light of multimillion hectare commitments for forest and landscape restoration.

The effective conservation and sustainable use of A. saman requires detailed knowledge of its genetic diversity across its native distribution range of which surprisingly little is known to date. We assessed the genetic diversity and structure of A.saman across twelve representative locations of SDTF in Colombia, and how they may have been shaped by past climatic changes and human influence. We found four different genetic groups which may be the result of differentiation due to isolation of populations in preglacial times. The current distribution and mixture of genetic groups across STDF fragments we observed might be the result of range expansion of SDTFs during the last glacial period followed by range contraction during the Holocene and human‐influenced movement of germplasm associated with cattle ranching.

Despite the fragmented state of the presumed natural A. saman stands we sampled, we did not find any signs of inbreeding, suggesting that gene flow is not jeopardized in humanized landscapes. However, further research is needed to assess potential deleterious effects of fragmentation on progeny. Climate change is not expected to seriously threaten the in situ persistence of A. saman populations and might present opportunities for future range expansion.

However, the sourcing of germplasm for tree planting activities needs to be aligned with the genetic affinity of reference populations across the distribution of Colombian SDTFs. We identify priority source populations for in situ conservation based on their high genetic diversity, lack or limited signs of admixture, and/or genetic uniqueness.