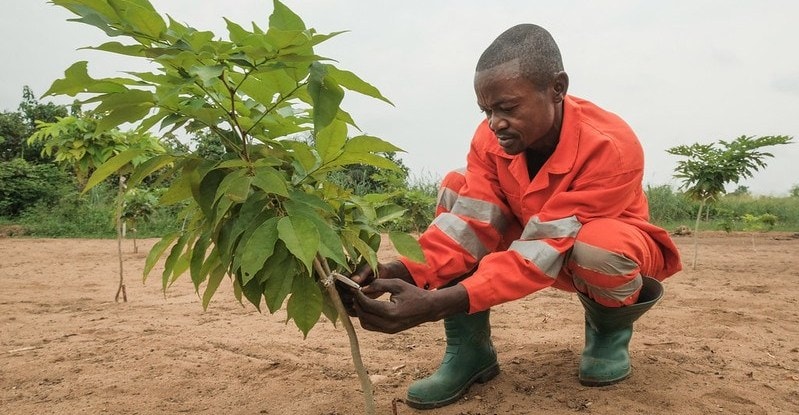 Around 40 kilometers south-west of the Ethiopian capital, Addis Ababa, native and exotic trees stand side by side on 8 hectares of the Suba Forest. Surrounded by tall junipers and idyllic mountains, this group of seed orchards is just one of many that serve as incubators for the country’s impressive landscape restoration efforts.

With a tiny carbon footprint by international comparison, this agriculture-dependent East African nation is leading the way in the fight against climate change by implementing a massive tree-planting campaign that is helping to reverse decades of deforestation, drought and land degradation. Ethiopia has pledged to restore 15 million hectares of forests and landscapes by 2030 and has turned local communities into land custodians in the process. Last year, the country highlighted its progress by planting a record 350 million trees in a single day.

Tree planting has become a ubiquitous feature of the environmental zeitgeist in a bid to slow the climate crisis by capturing carbon dioxide and restoring landscapes.

Research has shown that deforestation and land degradation account for $6.3 trillion in lost ecosystem services each year, yet every $1 invested in restoration generates $7–$30 in economic benefits. The opportunity costs offer an added incentive for governments, companies and citizens to meet the goals of the Sustainable Development Agenda, the Bonn Challenge, the New York Declaration on Forests and the African Forest Landscape Restoration Initiative. Yet tree planting is only one component of these broad-based efforts and cannot solve the climate crisis alone.

The Center for International Forestry Research (CIFOR) and World Agroforestry (ICRAF) have identified five global challenges of our time: forest degradation, rapid biodiversity loss, accelerating climate catastrophe, broken food systems, as well as increasing inequalities and inequities. Tree planting plays a key role in addressing these points while supporting around 1.6 billion people who depend on forested areas for their livelihoods. Planting programs also underpin the objectives planned for the U.N. Decade on Ecosystem Restoration 2021–2030.

“A carefully considered tree-planting strategy that includes local communities is essential to protecting the world’s soil, biodiversity and carbon sinks,” says CIFOR Director General Robert Nasi. “Afforestation and reforestation initiatives not only help to mitigate the effects of climate change, but also support the transition to a regenerative economy that casts nature as a partner rather than an obstacle.”

The task is more complex than simply planting seeds wherever there is soil: Success depends on the right tree for the right place and the right purpose.

Planting is just the start of the restorative process and should be seen as a long-term investment in the management and growth of a tree over many years. Planters must select a seed that suits the site and supports trees’ multiple functions as a source of food, livelihood, habitat for wildlife and protection for air, water and soil quality. Instead, forests are often viewed as a single commodity that needs to be cleared for palm oil plantations, converted for other cash crops or felled for timber harvesting, neglecting their potential as nature-based solutions.

Chile’s decades-long afforestation policy provides an insight into the pitfalls of poorly designed tree-planting initiatives. Decree Law 701 – which was in effect from 1974 to 2012 and was one of the world’s longest-running subsidy programs of its kind – led to the replacement of native forests with profitable tree plantations, causing a loss of biodiversity and natural carbon sinks.

The Chilean experience offers a lesson to initiatives such as the Trillion Tree Declaration and the Bonn Challenge, which has received pledges from 74 governments to restore more than 210 million hectares of land. About 80 percent of these commitments involve monoculture plantations or a limited mix of trees that produce fruit or rubber rather than restoring native forest, according to a Stanford University study published in June 2020.

“Although monoculture trees are important sources of timber while also relieving pressure on native forest exploitation, their locations within the landscape should be carefully evaluated,” says Manuel Guariguata, CIFOR’s principal scientist for tropical forest ecology and forest management. “Native ecosystems are not meant to be replaced by tree plantations, and the aspirations and goals of local communities should be respected, including their customary tenure rules and norms. We need to move away from top-down, technocratic approaches to tree planting and work more from the bottom up.”

To prevent these unintended consequences, planters must consider what they are trying to achieve.

Sometimes it is appropriate to avoid planting anything when natural regeneration is a better option or when non-forest ecosystems, such as grasslands, are involved. When the decision to plant is made, multi-purpose landscapes with diverse species are preferable because they support livelihoods, biodiversity and the environment. The planting site should allow the tree to survive under changing conditions in a supportive environment with cooperative stakeholders and strong community participation based on gender equality.

“Our starting point is the farmer and understanding their landscape and needs,” says Susan Chomba, an ICRAF project manager who leads the Regreening Africa project. “But there are structural inequalities between men and women in ownership and access to trees. So, my questions for many tree-planting programs would be: Which trees are you planting? Who decides on the species? And how are the species ensuring that the needs of women and men in different societies are met equally?”

Women and men also have diverging preferences in the tree species that they want to grow based on their needs, Chomba says. In the Sahel region, for example, men tend to choose tree species such as cashew and mango, which provide them with income, while women prioritize others, such as shea, Moringa and Baobab, which give them food as well as income, she adds.

“Planting a tree is never without implications,” says Cora van Oosten, a senior project leader at the Centre for Development Innovation, Wageningen University and Research, in the Netherlands. “When food crops are replaced by commercial trees, for example, the new value of the land may increase in the eyes of a forester, but decrease for the person who depends on the food crops. It may be valuable in terms of monetary gains, but lose value in terms of food security or biodiversity. In some countries, planting a tree means appropriating the land, which means alienating the land of someone else. These issues need to be well considered before even thinking of planting trees. It is a means to achieve something, not an end in itself.”

Tree planting also should not be viewed as a panacea for today’s global crises and must be carried out in combination with other measures. These include the decarbonization of key industrial sectors – including energy and transportation – along with initiatives such as the U.N. Collaborative Programme on Reducing Emissions from Deforestation and Forest Degradation in Developing Countries. REDD+ aims to conserve existing ecosystems through forest governance, tenure security, gender equality and stakeholder engagement.

Almost a quarter of the world’s human-induced greenhouse gas emissions come from agriculture, forestry and other land uses. By adding to the 3 trillion trees already on the planet, humans can help limit the impacts of global warming to 1.5 degrees Celsius above pre-industrial levels – as outlined in the Paris Agreement – through carbon capture by natural means.

For many countries – such as Ethiopia, Nepal and China – forest restoration success has come with the devolution of land rights to local user groups after years of state management. In the case of China, which emits more greenhouse gases than any other nation, the shift to community participation began in 1981 and was accelerated with land tenure reforms in 2003 and 2008. This gave households, leaseholders and village collectives control over forested areas and boosted their willingness to invest in afforestation. As a result, China has increased its total forest area by at least 74 million hectares over the past decade.

India, Pakistan and Rwanda have also implemented tree-planting campaigns, while more than 20 countries in Africa have embarked on the construction of an 8,000 km wall of trees – known as the Great Green Wall – across the continent from Djibouti in the east to Senegal in the west.

“We know of communities’ lands in West Africa that have been saved from complete destruction through tree-based soil conservation,” says Ramni Jamnadass, co-leader of tree productivity and diversity at ICRAF in Nairobi. “The restoration agenda is on a new path. Previously, the emphasis was on exotic species, but we are now seeing the successful promotion of Indigenous species, such as baobab and zizyphus, in West Africa. With respect to large-scale restoration, as in Ethiopia, there is still a reliance on fast-growing exotics because they are available, but a program is now being built up to include many more Indigenous species.”

While many of the successful planting initiatives have taken place in developing nations, industrialized countries have also committed themselves to tree-based climate solutions. In 2020, the United States announced its intention to join the Trillion Trees pledge, and the European Union released its plan to plant 3 billion trees over the coming decade.

However, restoration efforts can take many years, or even decades, to have a meaningful impact. Sweden – more than 70 percent of whose land area is covered by forest – has long been a role model for such programs. The Scandinavian nation has doubled the size of its forests over the past hundred years. South Korea has also demonstrated long-term success with land restoration, managing to almost double its forested area over a 50-year period.

“Some ecosystem functions can be restored relatively quickly, such as the provision of fodder, construction material, fruits and nuts for food and nutritional security,” Chomba says. “But regulating climate change and restoring hydrological functions as well as biodiversity will take a relatively long time to achieve.”

Scientists estimate that about twice as many trees existed on Earth before human civilization. International efforts are now under way to reverse the deforestation and land degradation inflicted over many centuries.

By planting the right tree in the right place for the right purpose, countries and people can help repair ecosystems and halt the advance of climate change.