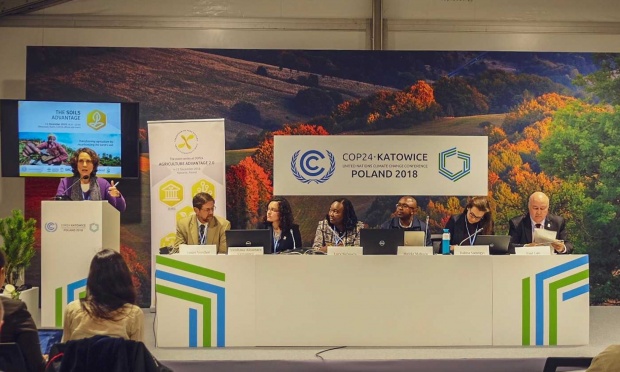 Soil carbon has become the darling of the climate change world, because it can accomplish both adaptation and mitigation. But can we indeed mobilize solutions for increasing soil carbon at large scales?”

The Earth’s soils can absorb a significant amount of carbon via plants and ecosystem processes, and has the potential to store this carbon for decades. Up to 7 billion more tons of CO2 could be removed from the atmosphere per year through better land management. Increasing soil carbon content has other environmental benefits as well, such as improved soil water retention, decreased soil erosion and improved yield stability, among others. On the other hand, given the large amount of carbon currently stored in soils, even a low percentage of losses would have a significant impact on the atmosphere. We have to both put carbon back into the soil and prevent further soil carbon loss.

The issue currently represents only a small fraction of the climate debate, and deserves greater attention. At the Soils Advantage event, part of the larger Agriculture Advantage 2.0 event series at COP24, approaches to enabling implementation at scale were discussed by scientists, the private sector, farmers and policymakers. Moderated by Viridiana Alcantara Cervantes, Technical Advisor for the Federal Office for Agriculture and Food in Germany, the event aimed to clarify opportunities to and challenges for scaling investment and action.

There is scientific consensus that storing carbon in soils helps mitigate climate change. Louis Verchot, Director of the Soils Research Area for the CGIAR Research Program on Water, Land and Ecosystems (WLE), welcomed the increase in recent years in the number of studies on the potential of carbon sequestration in soils, but pointed to the need for further research.

According to Verchot, the potential of peatland hotspots to sequester carbon is currently underreported. A recent study—using an innovative expert system model to map soil carbon—concluded that tropical peatland areas were more important than thought previously. Research on soils, especially in underreported areas, and finding new ways to collect data will be crucial to informed scaling.

The business case for investment

Businesses also have an important role to play in supporting soil health and should be part of the solution. Dalma Somogyi, Manager of Climate Smart Agriculture for the World Business Council for Sustainable Development (WBCSD), introduced a recently launched publication that outlines a solid business case for investing in soil health. The report includes a toolbox for businesses explaining steps to taking soil health into account in their operations.

Farmers need returns. They may not have four or five years to wait to see the benefits of a system, explained Majola Mabuza, Programme Officer for the Southern African Confederation of Agricultural Unions (SACAU). “Most often good farming practices benefit the environment and society more than the farmer,” he continued. He argued that there is a need for investment that accounts for the loss of revenue during the years of transition towards better practices, and proposed that carbon credits could incentivize better soils practices.

So why are things not happening? We have everything: the science, the analysis… What gets planned for, what gets budgeted for, what gets monitored and evaluated, gets done. That has to start from policy.”

The missing link for soil carbon is policy, argued Lucy Ng’ang’a from the Ministry of Agriculture, Kenya. Governments have to start making informed decisions as countries, involving diverse actors in that decisionmaking, she said. A platform for researchers and other experts to inform policymakers could help to influence policy development in the right direction.

Paul Luu, Executive Secretary for the 4 per 1000 (4p1000) initiative, agreed that collaboration will be crucial if we are to achieve improved outcomes for soil carbon.

We need to bring farmers and scientists into the same room, he said. Scientists need to see farmers as crucial drivers of our food systems. Farmers also need to see scientists as providers of knowledge that could benefit them. Business actors, policymakers and the civil society should also be part of decision-making processes: “Working together is the only way to find solutions to save the planet,” he concluded.