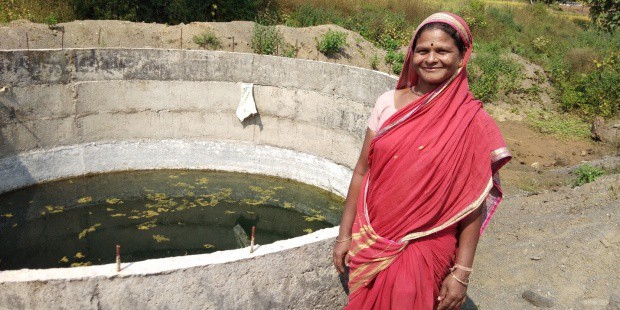 The impacts of climate change, such as erratic rainfall and changing river runoff, made the procurement of irrigation for his land of 1.6 hectares a struggle for Manohar Evane—a farmer in the drought prone Betul district of Madhya Pradesh, India. Even though a seasonal water channel flows near his farm, the lack of pumping and storage facilities force him to either practice rain-fed irrigation only or purchase water from the neighboring farmers. Adapting to the unpredictability of the weather has been weighing him down economically, as he pays approximately half of his crop earnings to secure irrigation for the field. Inspite of all the hard work and efforts of many generations, the socio-economic status of his family has not improved.

To address such issues, the climate-smart agriculture approach was introduced in the district through a USAID funded project, implemented by BAIF Development Research Foundation and The CGIAR Research Program on Climate Change, Agriculture and Food Security (CCAFS). The project titled “Scaling-Out Climate-Smart Village Program in the Vulnerable Areas of Indo-Gangetic Plains of India” strives to scale-out climate-resilient agricultural intervention through CCAFS’s successful climate-smart agriculture approach at Climate-Smart Villages (CSV).

To enable farmers cope with drought and irregular rainfall, the project is facilitating the construction of water storage structures as part of scaling out water-smart interventions in the district. Many farmers like Manohar have been helped to access Centre and State sponsored schemes such as the National Mission for Sustainable Agriculture (NMSA) and Kapil Dhara Yojana. The convergence of funds and efforts of stakeholders is facilitating the construction of individual or community level structures, such as open wells and farm ponds, enabling affordable water access to farmers. Secured source of free water has turned out to be the cornerstone to improving their socio-economic status.

Convergence of efforts of stakeholders for resilience

Several centrally and state sponsored schemes of the Government of India strive to improve the lives of farmers. However, factors such as limited information, illiteracy and bureaucracy make accessing these schemes difficult for the farmers. In addition, these schemes exist in isolation, mostly dealing with only a certain aspect of a problem instead of the whole. This called for a platform of convergence to establish synergy in planning, process and implementation, to offer a holistic and integrated solution. Therefore, a new initiative established a common platform for farmers, government officials and other stakeholders to discuss, plan and implement government schemes in a participatory manner.

To begin with, the project formed community-based groups titled “Village Climate Management Committee (VCMC)”. Members of the group are closely involved in the processes to ensure a demand driven approach is followed in implementing the project. The project facilitated the process by taking up following roles:

With the support of the project, many water-smart interventions were made in a participatory manner, in which the majority of the funds (80–90%) were procured from the government scheme and only the remaining amount was given by the farming community members. Manohar, the aforementioned farmer, paid 20% of the cost to have an open well constructed at his farm, while the remaining amount was obtained from Kapil Dhara Yojana. Another farmer, Suman Ramdeen from Silpati village of Betul district, had a fully funded farm pond constructed along with a farm bunding under the Kapil Dhara Yojana.

The initiative contributes to the development of a climate-resilient agricultural system in various ways. For instance, it has enabled cost saving (by almost 50%) for the farmers, as they no longer need to pay for irrigation. Additionally, increased access to water is also supporting farmers’ aspiration to increase cropping intensity as well as diversify into vegetables.

Premvati Rajesh Parde, a woman farmer from Kala pani village of Betul district, has started growing vegetables after having her farm water well deepened. She said: “Vegetable cultivation has been a dream come true for me. I have been able to earn more than 10,000 INR in two months (Aug and September 2019) by selling vegetables. I plan to use this money to better educate my children”.

The convergence of funds and efforts of partners is playing a pivotal role in anchoring climate-resilient agricultural practices in Betul district, by facilitating safe and secure access to irrigation. The enabling mechanism created through this initiative should continue to support beneficiary farmers and the adjoining communities well beyond the life of the project.