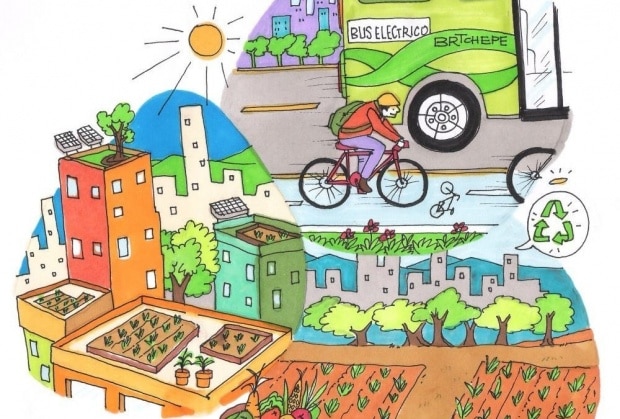 This post was originally published on Ojo Al Clima (in Spanish)

It has already happened to us. There is a moment when we visualize in full color what the weather may cause. For some people in Central America, more and more often, it’s when the crisis comes: the river that took the house, the drought that destroyed the harvest, the flood that inundated the town. For others, something happens around us that makes us imagine what the future may be like if extreme weather events persist. It can be a news piece, a post on social media, or a photo that triggers the Matrix effect in our mind and makes us see how everything is connected, that the climate directly or indirectly will impact every aspect of our life, our societies, and countries. And when that happens, it’s inevitable to be scared.

The efforts to imagine challenging futures where we can transform our societies and coexist with climate change are more frequent now that the international community, governments and citizens are aware of the urgency of climate action. That’s what I do in my job. I work with governments to explore what their country could be like in the future, mainly the aspects that are still very uncertain and related to climate management. In this space we work jointly with other leading actors, such as entrepreneurs, researchers and farmers—sometimes with very contrasting opinions between each other. The image above is part of that process.

Together, they look for answers to questions like what kind of food are we going to eat in thirty years? Where will they be produced? How are we going to handle the water shortage? How are we going to achieve decarbonization of the economy if at this moment we are dependent on oil? What challenges could we encounter along the way and what opportunities will there be to combat them?

The idea of these exploratory exercises is not to predict what is coming; the future is uncertain and that cannot be changed. However, anticipating and analyzing the elements that influence these uncertainties help to make decisions. It helps to understand what has not been taken into account when creating policies and strategies to manage climate change and what assumptions about the future must be adjusted to achieve transformational changes.

The challenge is that these explorations of the future should not only deal with climate. Climate change will make it more complicated to estimate the timing and intensity of periods of drought and rain or extreme events such as hurricanes. However, we also don’t know in what conditions the countries will be in order to respond to these incidents, and even less if they will be effective in doing so. There are many other challenges to face, such as the disruption of the labor market, the fourth industrial revolution, migration, aging population and the decline of biodiversity, to name a few. The weather only complicates them. This makes the efforts of countries to adapt to the climate and mitigate its effects even more challenging. The complexity of commercial, economic, natural, political and social systems makes it difficult to predict how countries will address climate change.

This is when we can bring the future to the present. The fact of imagining very concretely how some of these uncertainties may evolve in our countries gives us clues about the decisions and actions to be taken in the present. If we achieve this, we can improve our resilience to climate change.

There lies the essence of what we call anticipatory climate governance. This is the anticipation of uncertain climate futures and the use of knowledge acquired in the present to manage climate phenomena. This type of governance gathers methods such as the creation and modeling of future scenarios, environmental impact assessments, climate projections, vision exercises, and vulnerability and risk studies.

In Latin America we have been working on this topic for more than five years. The processes that we designed and implemented with the governments of Costa Rica, Honduras, Peru and the Central American Integration System (SICA) have been great lessons for the research that is done on this global practice, still emerging.

One of the lessons we’ve learned is that exploring future scenarios can be a useful tool when a country is clear that their path must be radically different. Something recurrent in the cases we support is the feeling that the usual planning methods are obsolete for these more complex problems.

For example, in 2015 when the Costa Rican government defined how much greenhouse gases (GHGs) were going to be reduced in the following 85 years, to present for the Paris Agreement, it realized that the method established by the international community to define that goal did not give the results they wanted. They were not ambitious enough. They then opted to complement this goal with a participatory process of consultations where four future scenarios were created for 2050, together with key actors from emitting sectors such as producers, livestock breeders and representatives of industry chambers.

The process helped to understand which strategies to reduce emissions were going to be effective, which ones were not, and how they should be adjusted. In the ‘Hipster Republic’ scenario, the social pressure of citizens to the State results in an efficient public transport network, while the ‘Torment Without Water’ scenario warns of the dangers of favoritism when water sources end up in private hands. In the ‘Decomposed Tere’ scenario the country’s energy matrix has returned to fossil fuels as hydroelectric dams ran out of water. Through this creative process of imagination and analysis of plausible futures, the government was able to confirm that key actors of the largest emitting sectors of the country had even more ambitious proposals than those that already existed, and that the challenging goal that they have in mind was going to be achieved. Months later, the Paris Agreement was signed, from which Costa Rica ratified its global leadership in environmental, social and climatic terms.

While we are learning about the plausible climate futures, we also realize what needs to be done. We would love to see that municipalities, communities and national governments properly facilitate and lead these processes to decide how to be more resilient in the face of expected changes. Therefore, training in exploring future scenarios is on our list of priorities for the coming years. On the other hand, at the level of science there is still much to understand about the political aspects of anticipatory governance. For example, when making decisions about the climate, who defines what the future will look like? When they do that, who is involved? How do those ideas about the future influence policymaking? The only sure thing in all this is that we will not get bored while we find out the answers.