Farmers Take the Lead in Research 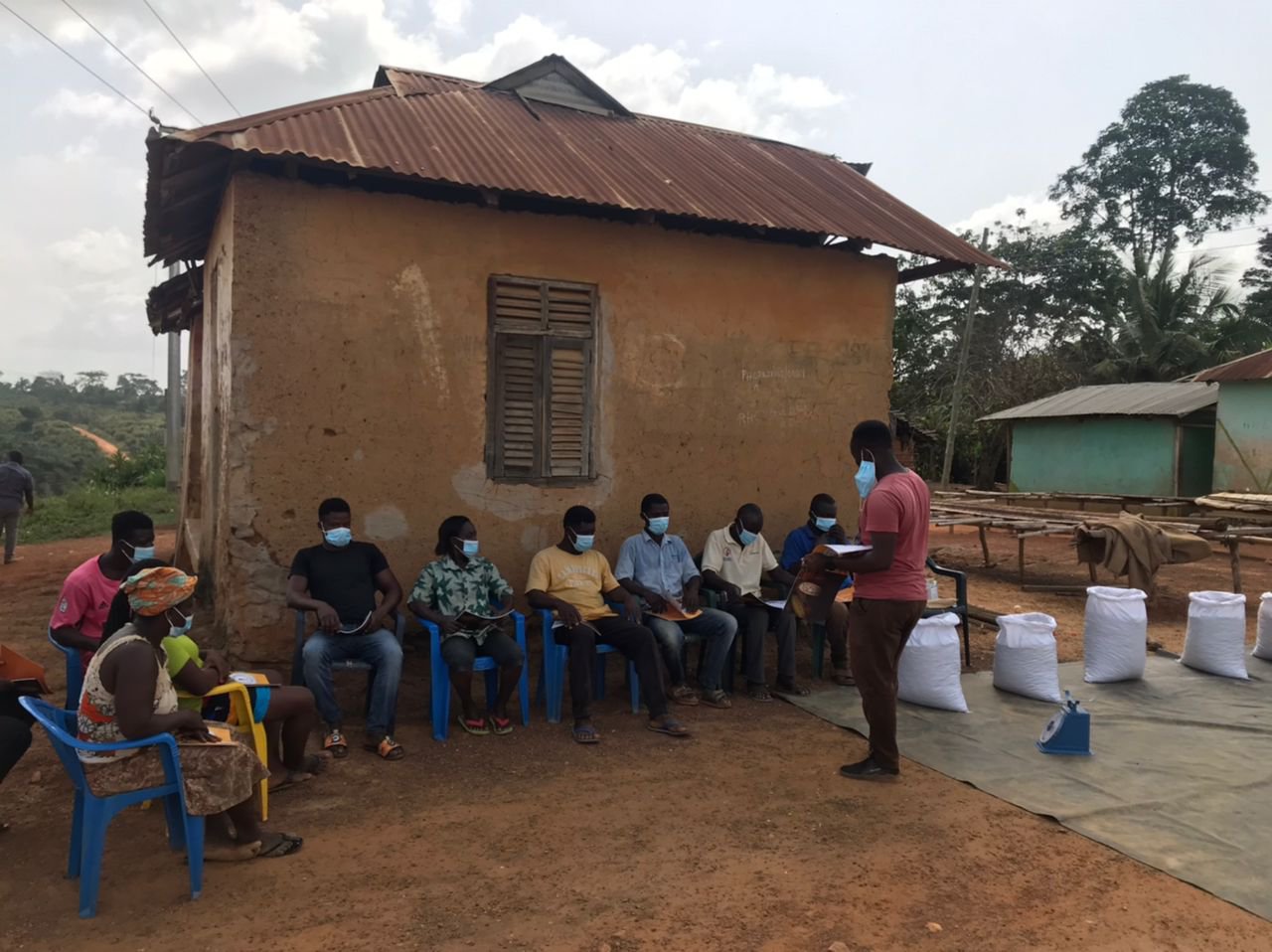 To involve farmers in research and have a genuine partnership between researchers and farmers, farmers should be in the lead. That can be done through citizen science, as cocoa research in Ghana shows. Learning about entrepreneurship is also done side by side with farmers.

“Farmers became the researcher. They were in charge of the experiments they do in their own plots. It made farmers much more involved than in previous research projects.” Speaking is Jacob Ulzen, a postdoc researcher at the Alliance of Bioversity and CIAT, one of CGIAR’s Research Centers, about the CocoaTarget project he coordinates in Ghana.

In this citizen science project, part of the NL-CGIAR Seed Systems Development (SSD) programme of NWO-WOTRO, farmers test new varieties of cocoa, do measurements themselves and give feedback based on their findings. The ultimate aim is to get farmers’ feedback to the breeding institute of cocoa in Ghana, and contribute to the development of more climate resilient and stress-tolerant cocoa varieties. Ulzen: “We have shown that farmers see a clear difference between different varieties of cocoa, and are able to generate accurate scientific data. This proved to be an efficient and cheap way to do research.” As it takes time for cocoa trees to mature, it is too early for clear results on what varieties are most climate resilient.

The approach is different from most field-testing projects in the past, adds his colleague Jacob van Etten, who is Research Director, Digital Inclusion, at the Alliance of Bioversity International and CIAT, and also the principal investigator of the CocoaTarget Project. “In conventional trials, researchers come to conduct trials on a few large plots of farmland, whereby the researcher is in charge. We turned it around and put the farmers in charge, who did on-farm trials on over 300 much smaller plots, incorporating the trial in their normal farm operation.”

The project is a successful example of a new form of cooperation and partnership between researchers and farmers, Van Etten says. “Farmers have always been knowledge generators, but historically science has marginalised farmers. We try to overcome this now through citizen science. It is important that the perspective of farmers is brought out in research and that research focusses on topics that are relevant for farmers. Science should rather be a service to farmers, not the other way around.”

It is important to engage farmers in research, Domenico Dentoni agrees. He is Senior Expert in the NL-CGIAR research programme, and is full professor of Business, Resilience and Transformation at the Montpellier Business School and affiliated to Wageningen University. “To tackle complex problems like the lack of food and nutrition security, we need to get the perspectives of different people together. We need the participation of farmers.”

However, participation of farmers means different things to different people, Dentoni notes. “The meaning of the word participation is ambiguous. For managers and business scholars, too often, participation just means linking farmers to food markets. Sociologists, on the other hand, understand farmers’ participation in a much richer way, considering farmers as part of the social fabric of their communities. We need to get these perspectives together, and see farmer entrepreneurship as a process of learning how to navigate market and social challenges.”

In many research projects, dealing with participation of farmers is led by social scientists, who use qualitative methods, and aim to ‘bring in the voice of farmers’, Van Etten says. In many such projects, farmers have a passive role. They show up at a meeting, fill in some form, get lunch and go home. Van Etten: “We change that dynamic to citizen science, in which farmers are much more in the lead and have a much more active role. It is their farm and their experiment. And it is about doing something, not only about having a say. Farmers are very motivated and enthusiastic and exchange their results amongst each other.”

That same energy is what is studied in many CGIAR research projects, Dentoni says, but then it is called entrepreneurship. “Entrepreneurial farmers are not those who only strive for profit; this is a common misconception. Instead, they are the ones who have the capacity and attitude to see opportunities and resources, where others do not see them, to make meaningful changes and improve livelihoods in their community.” Much research has been done on farmer entrepreneurship, but results were not shared and used in practice as much as they could have been. Therefore, Dentoni created and leads a new platform, the Entrepreneurial Learning in Inclusive Agribusiness platform (ELIA), that advances, tests, integrates and disseminates knowledge on how farmers learn from their market endeavours and business training activities.

Learning is a form of participation, Dentoni says. “We found in research that taking the lead was very important for the development of entrepreneurship among women drying and selling fish in the Philippines, for example. With the support of Farmer Business School, farming and fishing communities set up their own market and social experiments.” In another case, research was done on the Agricultural Commodity Exchange, a market trade platform for the exchange of commodities in Malawi. “There we found that some farmers were able to engage with the platform and benefit from it, while others were not.” Small-scale farmers could not produce enough volume to trade directly with the platform. A solution was to create local storage capacity, shared by farmers, and to adapt storage techniques to the changing local market and ecological conditions. “The participatory discussions on where to place this local storage capacity resulted, in some communities, in supporting farmer entrepreneurship.”