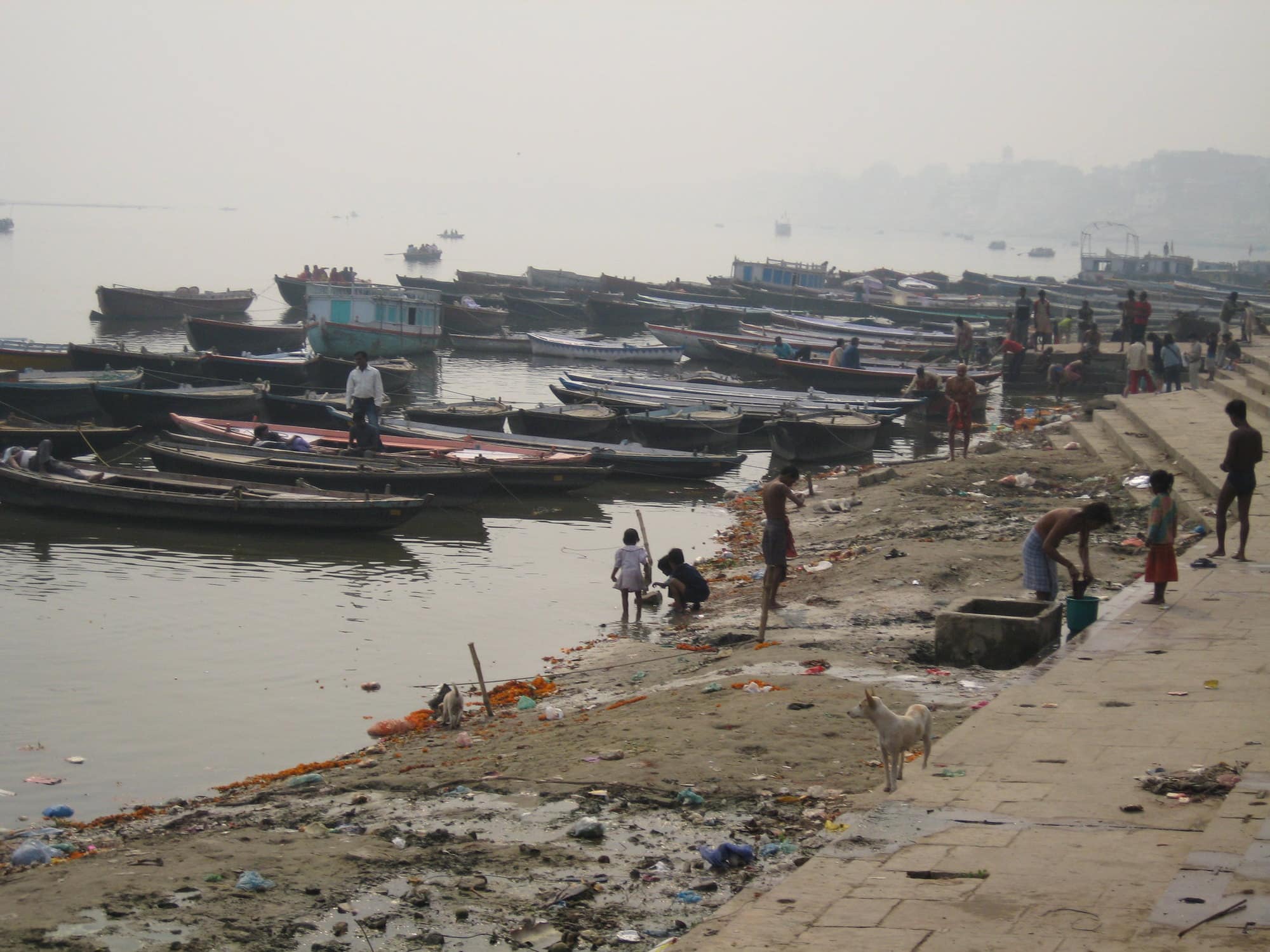 The Ganges Delta – like deep-set veins seeping through the land from the sea, densely populated, with an economy reliant on farming – is incredibly vulnerable to the impacts of climate change.

How does climate change disproportionately impact women and minorities in Bangladesh? And what are the sustainable solutions?

How can research bridge the gaps between climate security science and the policies needed to allow for adaptation and sustainable peace? What are some examples of conflict in the region?

I spoke to Ph.D. candidate Suza Ma about how such cutting-edge research will play a vital role in providing evidence to policymakers to enact the change that is needed to protect from climate exacerbated conflict in Bangladesh, especially in the coastal regions home to 30% of Bangladesh’s population.

Suza is a researcher in a new Climate Security Ph.D. program in partnership between Wageningen University and Research (WUR), CGIAR, and the Stockholm International Peace Research Institute (SIPRI).

The programme sees three young and outstanding all-female candidates represent the global South as well as the North, focusing their research on climate security in the Sahel and the Asian deltas of the Mekong and the Ganges.

In your own words, Suza, what is ‘climate security and why is it important in Bangladesh, specifically’?

I would define climate security as ‘the way in which climate change transforms the peaceful phenomena of society. If we take Bangladesh as an example, there are current tensions between farmers in coastal regions and politically powerful people over land rights. Because of coastal flooding and rising sea levels in Bangladesh, salinization is increasing, the land is becoming unproductive which has driven many into shrimp farming.

Shrimp farming is only made possible where saline water is available. And with profit comes more interest from powerful parties with interest in these farmers’ lands. Often farmers do not have another means of income, so when the land is taken, some farmers migrate, some resort to physical violence resulting in violent conflict, which has escalated since the nineties.

The evidence of conflict is already before us. Particularly in the coastal regions where 30% of the Bangladeshi population live. The Ganges Delta is the most densely populated in the world. And almost every year, cyclones destroy homes and livelihood, and this increases grievances and contributes to conflict and even an increase in violence against women and girls.

Tell me a bit about your personal journey to climate security research?

When we talk about climate change, it is no surprise that Bangladesh is one of the most visible examples. Even before starting my Ph.D., I had already assessed some of Bangladesh’s environmental laws and policies—as well as transboundary water conflicts—during my joint-masters Erasmus program on Groundwater and Global Change (GroundwatCH). And of course, being a native of Bangladesh – I have an acute understanding of the issues at a local, national and international level.

The objectives within the research were particularly attractive, as now we have the unique opportunity to adapt it to exactly what angle we feel is the most advantageous in terms of influencing policymakers in Bangladesh to enact climate security policies – to effect positive, sustainable change.

Over the last three months, together with my supervisor and mentor, I have explored the various parts of Bangladesh that my research could focus on, including coastal flooding, salinization, river flooding, drought – every area where climate events are rife. However, the challenge is identifying that one particular outstanding and pivotal part to focus on, which groups and what types and levels of conflict we are to observe.

The idea is to find the nexus between climate, food insecurity, and conflicts. My work focuses on coastal flooding and subsequent salinization in the coastal region and how these shocks are indirectly contributing to conflict. While understanding the pressure on pre-existing drivers such as political tensions, socio-economic and social inequalities.

How will you apply a gender lens in your work?

We know that gender inequality can harm a state economically and socially and that states’ ability to combat climate change.

This is one of my main research objectives. Women, children, and elderly people are particularly vulnerable to climate change and the mortality rate is higher in these groups due to the restriction on movements during extreme climate events like flooding.

When men migrate to urban areas in search of a job, they leave their daughters and wives behind. The societal belief system in Bangladesh is such that a family led by a woman is regarded as vulnerable to abuse and exploitation. This also inflates the risk of child marriage as the mother believes that the daughter may be safer when married to a man than being in a fatherless family.

There is a clear human security dimension to climate security in your research. You mentioned some very concerning issues which can arise after a family breaks down, could you expand on this?

When a man leaves the home, the woman becomes the head of the family and shoulders all responsibilities. This exposes her vulnerability outside the family compound as well as to the risk of sexual violence. During climate events, freshwater scarcity is very common and women have to walk for hours to fetch water which is one of their primary responsibilities. Such activity exposes the women to sexual harassment on their way to fetch the water.

Women, in search of water, are a major risk which has accounted for several rapes and sexual abuse reported during water excursions. This increasing rate of sexual violence creates unrest in the community and gender inequality.

Our societies need to change their perception of women as physically weak. Some Bangladeshi men, seeing women as vulnerable, do not help achieve gender equality. These social norms must change.

Bangladesh has made primary and secondary education free which is positive. Girls who study in Bangladesh often achieve better grades than their male counterparts, and education is essential to changing societal norms that disadvantage women. However, some families are still concerned about sending their daughter to school due to the risk of sexual harassment and violence en route to school. So, it is a vicious cycle. The poor are becoming poorer, which is exacerbated by climate change.

What is unique about your Ph.D. is that you represent the bridge between science, research, and policymaking. Could your research influence policymakers in Bangladesh?

What is particularly unique about my research is that I am linking all factors influenced by climate change with food security and conflicts. My work will focus on gender, migration, and social inequalities together with other drivers. In my research, I will be finding practical answers to questions such as – ‘what makes people decide on migrating or not from climate-vulnerable areas?’ After migration, is there any “group identity” conflict in destination areas?

To understand the dynamics of “group identity” conflicts, Chittagong Hill districts have been chosen as a research area. Conflicts in Chittagong Hill tend to be between minority non-Muslim and non-Bengali locals and Bengali Muslim immigrants from areas that are currently experiencing riverbank erosion and flooding. It is the Bengali immigrants that receive support from the state.

I will evaluate the impacts of climate change and how it put stress on those multiple drivers together and ultimately assessing how they are indirectly linked to the conflict in the region. My research will focus on specific groups and communities. The ultimate aim will be to present the evidence to policymakers of conflicts related to food insecurity which are exacerbated by climate change.

Back to the bridge question – would your research be more persuasive to help the farmers in those rural areas? You are, in many ways, an olive branch between the policymakers, the science, and the research?

The main idea is to focus on the most vulnerable communities and their difficulties, and how they are coping. Issues faced by women, young people, and minorities are all related to climate change, which is often an aggravating factor. Our work can be eye-opening to the societies in Bangladesh to know the linkage and to help policymakers understand this link, which is economically, socially, and politically advantageous to enact climate security-sensitive policies and laws.

Will you be actively speaking to farmers on the ground?

Yes, of course — from individual conversations to focus group discussions — to find out how climate change is affecting their lives. Do they feel conflicts are increasing with increasing climate events? What do they understand by conflicts? How does it differ from my way of seeing conflicts? These questions require answers to avoid information bias. One of the biggest problems I need to deal with.

It seems, that everyone would win if climate security policies were enacted and could help prevent the conflicts that are rife and exacerbated by climate change?

Yes, everything is competitive because of population stress, land use, and climate change.

Many women have an affinity to nature, meaning the inclusion of women leaders to enact change is very important in the context of climate change.