Youth in livestock and the power of education: the case of “Heirs of Tradition” from Colombia, 2012-2020 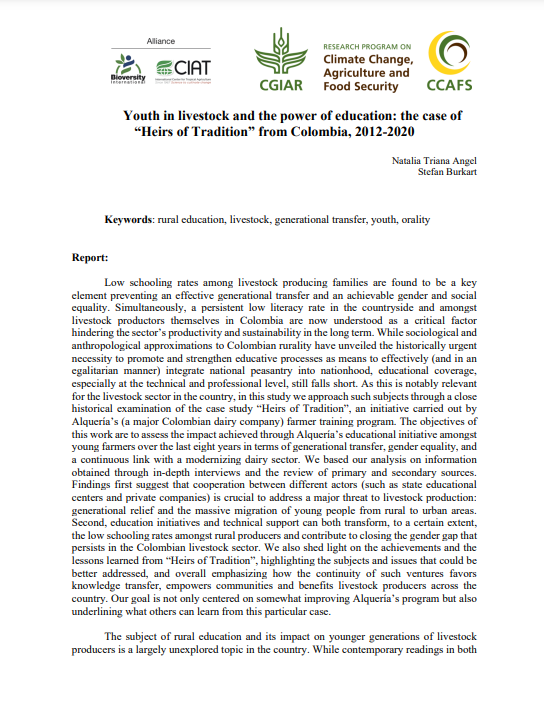 This article […] deals with the intersections of such labyrinthic matters, presenting a historical overview of the program Heirs of Tradition (2012-2020), led by the private dairy company Alquería and SENA (Colombian National Learning Center). Alquería, one of Colombia’s largest dairy companies, launched in 2012 a training program targeting the sons and daughters of small-scale milk producers with several purposes: first, to establish a stronger relationship with loyal suppliers across the country; second, to inform and empower younger generations with the necessary technical knowledge to promote a more sustainable, productive and modern stock farming and third, to tackle low schooling rates amongst their families.

This case study aims to reconstruct the story of the training program qualitatively, both by building on Alquería’s Livestock Development department’s archives and integrating the voices and testimonies of students and alumni in an attempt to evaluate its impact over time, assess the transformations it brought to producer’s families and underscore the ongoing challenges it faces. Here we argue that an educational project such as Heirs of Tradition was (and is) successful in helping families overcome the difficulties of generational transfer, in empowering younger generations with pertinent knowledge related to their socalled “traditional” (or family-inherited) job, and in promoting, to a certain extent, more solid, transferable basis towards gender equality. The subsequent sections will illustrate such revision by bridging Alquería’s eight-year job in the field with scholarly debates on rurality,
education, and livestock production in Colombia.