The performance of a wide range of plantain cultivars at three contrasting altitude sites in North Kivu, Eastern Democratic Republic of Congo 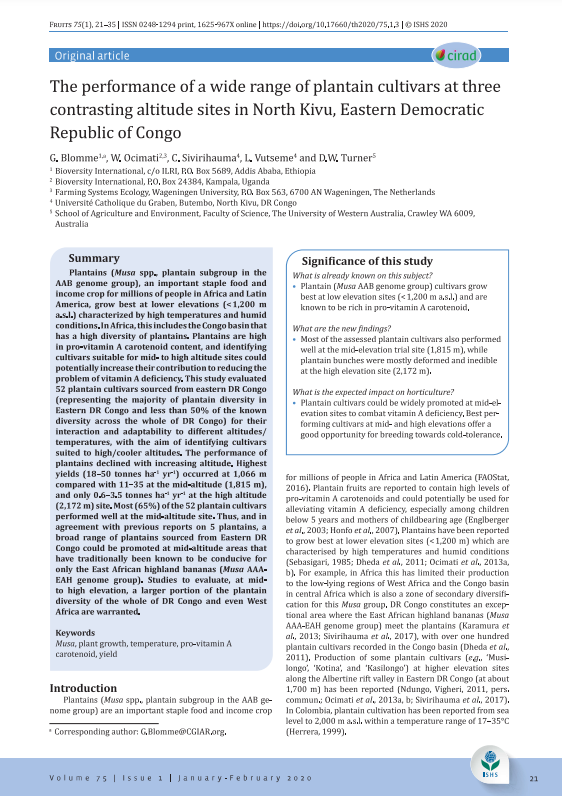 Plantains (Musa spp., plantain subgroup in the AAB genome group), an important staple food and income crop for millions of people in Africa and Latin America, grow best at lower elevations (<1,200 m a.s.l.) characterized by high temperatures and humid conditions. In Africa, this includes the Congo basin that has a high diversity of plantains. Plantains are high in pro-vitamin A carotenoid content, and identifying cultivars suitable for mid- to high altitude sites could potentially increase their contribution to reducing the problem of vitamin A deficiency. This study evaluated 52 plantain cultivars sourced from eastern DR Congo (representing the majority of plantain diversity in Eastern DR Congo and less than 50% of the known diversity across the whole of DR Congo) for their interaction and adaptability to different altitudes/temperatures, with the aim of identifying cultivars suited to high/cooler altitudes. The performance of plantains declined with increasing altitude. Highest yields (18–50 tonnes ha-1 yr-1) occurred at 1,066 m compared with 11–35 at the mid-altitude (1,815 m), and only 0.6–3.5 tonnes ha-1 yr-1 at the high altitude (2,172 m) site. Most (65%) of the 52 plantain cultivars performed well at the mid-altitude site. Thus, and in agreement with previous reports on 5 plantains, a broad range of plantains sourced from Eastern DR Congo could be promoted at mid-altitude areas that have traditionally been known to be conducive for only the East African highland bananas (Musa AAA-EAH genome group). Studies to evaluate, at mid- to high elevation, a larger portion of the plantain diversity of the whole of DR Congo and even West Africa are warranted.