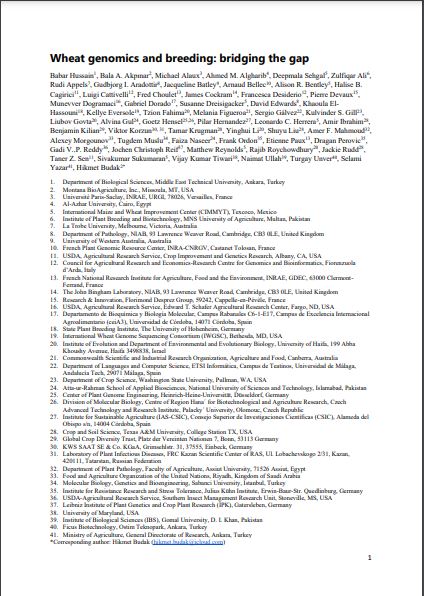 Recent technological advances in next-generation sequencing (NGS) technologies have dramatically reduced the cost of DNA sequencing, allowing species with large and complex genomes to be sequenced. Although bread wheat (Triticum aestivum L.) is one of the world’s most important food crops, until very recently efficient exploitation of molecular marker-assisted breeding approaches has lagged behind that achieved in other crop species due to its large polyploid genome. However, an international public-private effort spanning nine years reported over 65% draft genome of bread wheat in 2014, and finally, after more than a decade culminated in the release of a gold-standard, fully annotated reference wheat genome assembly in 2017. Shortly thereafter, in 2020, the genome of assemblies of additional fifteen global wheat accessions were released. Wheat has now entered into the pan-genomic era where basic resources can be efficiently exploited. Wheat genotyping with a few hundred markers has been replaced by genotyping arrays capable of genotyping hundreds of wheat lines using thousands of markers, providing fast, relatively inexpensive, and reliable data for exploitation in wheat breeding. These advances have opened up a new horizon for marker-assisted selection (MAS) and genomic selection (GS) in wheat. Herein, we review the advances and perspectives in wheat genetics and genomics, with a focus on key traits including grain yield, yield-related traits, end-use quality and resistance to biotic and abiotic stresses. We also enlisted several reported candidate and cloned candidate genes responsible for the aforesaid traits of interest. Furthermore, we report on the improvement in the aforementioned quantitative traits through the use of (i) clustered regularly interspaced short palindromic repeats/CRISPR-associated protein 9 (CRISPR/Cas9) mediated gene-editing, (ii) positional cloning methods, and of genomic selection. Finally, we make recommendations on the utilization of genomics for the next-generation wheat breeding and provide a practical example of using the latest, in silico bioinformatics tools that were based on the wheat reference genome sequence.