Variation of macro- and microelements, and trace metals in spring wheat genetic resources in Siberia 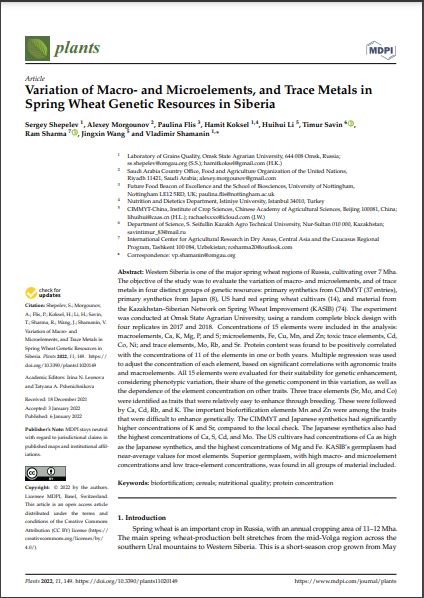 Western Siberia is one of the major spring wheat regions of Russia, cultivating over 7 Mha. The objective of the study was to evaluate the variation of macro- and microelements, and of trace metals in four distinct groups of genetic resources: primary synthetics from CIMMYT (37 entries), primary synthetics from Japan (8), US hard red spring wheat cultivars (14), and material from the Kazakhstan–Siberian Network on Spring Wheat Improvement (KASIB) (74). The experiment was conducted at Omsk State Agrarian University, using a random complete block design with four replicates in 2017 and 2018. Concentrations of 15 elements were included in the analysis: macroelements, Ca, K, Mg, P, and S; microelements, Fe, Cu, Mn, and Zn; toxic trace elements, Cd, Co, Ni; and trace elements, Mo, Rb, and Sr. Protein content was found to be positively correlated with the concentrations of 11 of the elements in one or both years. Multiple regression was used to adjust the concentration of each element, based on significant correlations with agronomic traits and macroelements. All 15 elements were evaluated for their suitability for genetic enhancement, considering phenotypic variation, their share of the genetic component in this variation, as well as the dependence of the element concentration on other traits. Three trace elements (Sr, Mo, and Co) were identified as traits that were relatively easy to enhance through breeding. These were followed by Ca, Cd, Rb, and K. The important biofortification elements Mn and Zn were among the traits that were difficult to enhance genetically. The CIMMYT and Japanese synthetics had significantly higher concentrations of K and Sr, compared to the local check. The Japanese synthetics also had the highest concentrations of Ca, S, Cd, and Mo. The US cultivars had concentrations of Ca as high as the Japanese synthetics, and the highest concentrations of Mg and Fe. KASIB’s germplasm had near-average values for most elements. Superior germplasm, with high macro- and microelement concentrations and low trace-element concentrations, was found in all groups of material included.