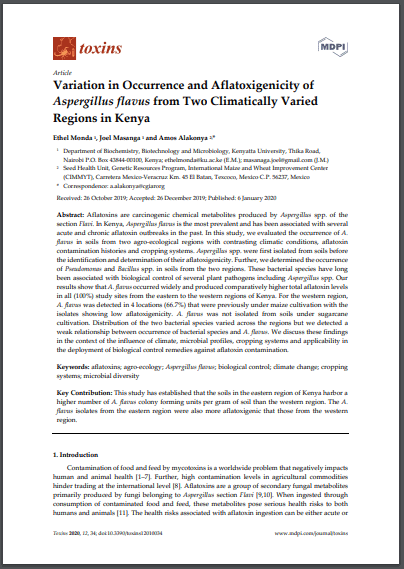 Aflatoxins are carcinogenic chemical metabolites produced by Aspergillus spp. of the section Flavi. In Kenya, Aspergillus flavus is the most prevalent and has been associated with several acute and chronic aflatoxin outbreaks in the past. In this study, we evaluated the occurrence of A. flavus in soils from two agro-ecological regions with contrasting climatic conditions, aflatoxin contamination histories and cropping systems. Aspergillus spp. were first isolated from soils before the identification and determination of their aflatoxigenicity. Further, we determined the occurrence of Pseudomonas and Bacillus spp. in soils from the two regions. These bacterial species have long been associated with biological control of several plant pathogens including Aspergillus spp. Our results show that A. flavus occurred widely and produced comparatively higher total aflatoxin levels in all (100%) study sites from the eastern to the western regions of Kenya. For the western region, A. flavus was detected in 4 locations (66.7%) that were previously under maize cultivation with the isolates showing low aflatoxigenicity. A. flavus was not isolated from soils under sugarcane cultivation. Distribution of the two bacterial species varied across the regions but we detected a weak relationship between occurrence of bacterial species and A. flavus. We discuss these findings in the context of the influence of climate, microbial profiles, cropping systems and applicability in the deployment of biological control remedies against aflatoxin contamination.