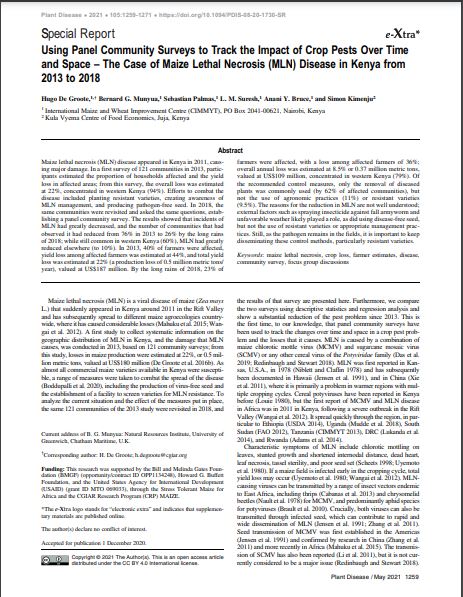 Maize lethal necrosis (MLN) disease appeared in Kenya in 2011, causing major damage. In a first survey of 121 communities in 2013, participants estimated the proportion of households affected and the yield loss in affected areas; from this survey, the overall loss was estimated at 22% (0.5 million tonnes per year), concentrated in western Kenya (94%). Efforts to combat the disease included planting resistant varieties, creating awareness of MLN management, and producing pathogen-free seed. In 2018, the same communities were revisited and asked the same questions, establishing a panel community survey. The results showed that incidents of MLN had greatly decreased, and the number of communities that had observed it had reduced from 76% in 2013 to 26% by the long rains of 2018; while still common in western Kenya (60%), MLN had greatly reduced elsewhere (to 10%). In 2013, 40% of farmers were affected, yield loss among affected farmers was estimated at 44%, and total yield loss was estimated at 22% (a production loss of 0.5 million tonnes/year), valued at US$ 187 million. By the long rains of 2018, 23% of farmers were affected, with a loss among affected farmers of 36%; overall annual loss was estimated at 7.5% or 0.37 million tonnes, valued at US$ 109 million, concentrated in western Kenya (82%). Of the recommended control measures, only the removal of diseased plants was commonly used (by 62% of affected communities), but not the use of agronomic practices (11%) or resistant varieties (9.5%). The reasons for the reduction in MLN are not well understood; external factors such as spraying insecticide against fall armyworm and unfavorable weather likely played a role, as did using disease-free seed, but not the use of resistant varieties or appropriate management practices. Still, as the pathogen is still in the fields, it is important to keep disseminating these control methods, in particular resistant varieties.