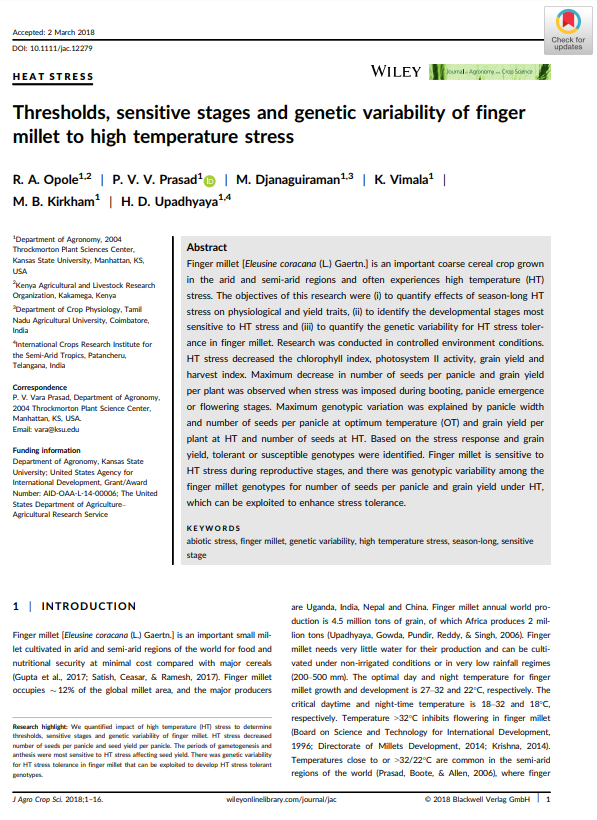 Finger millet [Eleusine coracana (L.) Gaertn.] is an important coarse cereal crop grown in the arid and semi‐arid regions and often experiences high temperature (HT) stress. The objectives of this research were (i) to quantify effects of season‐long HT stress on physiological and yield traits, (ii) to identify the developmental stages most sensitive to HT stress and (iii) to quantify the genetic variability for HT stress tolerance in finger millet. Research was conducted in controlled environment conditions. HT stress decreased the chlorophyll index, photosystem II activity, grain yield and harvest index. Maximum decrease in number of seeds per panicle and grain yield per plant was observed when stress was imposed during booting, panicle emergence or flowering stages. Maximum genotypic variation was explained by panicle width and number of seeds per panicle at optimum temperature (OT) and grain yield per plant at HT and number of seeds at HT. Based on the stress response and grain yield, tolerant or susceptible genotypes were identified. Finger millet is sensitive to HT stress during reproductive stages, and there was genotypic variability among the finger millet genotypes for number of seeds per panicle and grain yield under HT, which can be exploited to enhance stress tolerance.