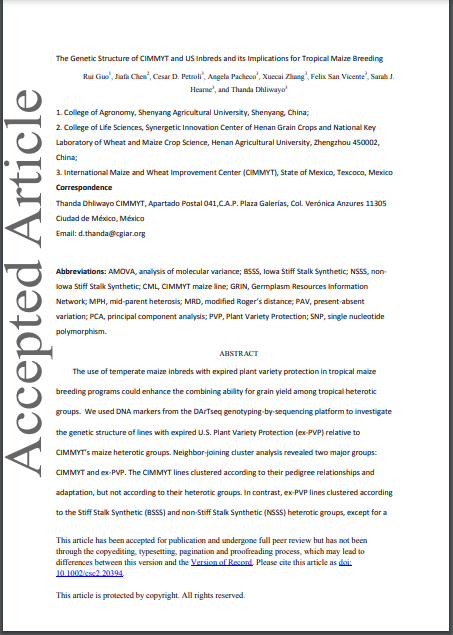 The use of temperate maize inbreds with expired plant variety protection in tropical maize breeding programs could enhance the combining ability for grain yield among tropical heterotic groups. We used DNA markers from the DArTseq genotyping‐by‐sequencing platform to investigate the genetic structure of lines with expired U.S. Plant Variety Protection (ex‐PVP) relative to CIMMYT’s maize heterotic groups. Neighbor‐joining cluster analysis revealed two major groups: CIMMYT and ex‐PVP. The CIMMYT lines clustered according to their pedigree relationships and adaptation, but not according to their heterotic groups. In contrast, ex‐PVP lines clustered according to the Stiff Stalk Synthetic (BSSS) and non‐Stiff Stalk Synthetic (NSSS) heterotic groups, except for a few lines that were considered to be mixed. The genetic divergence between BSSS and NSSS (FST = 0.053; P<0.01) was four times as large as the divergence between CIMMYT Tuxpeño and non‐Tuxpeño heterotic groups (FST = 0.013; P = 0.068). Estimates of genetic divergence marginally favored breeding with BSSS in Tuxpeño and NSSS in non‐Tuxpeño. However, CIMMYT breeders may still exploit the ex‐PVP heterotic structure fully only by ensuring that the temperate heterotic groups are placed on opposite sides of the Tuxpeño and non‐Tuxpeño heterotic pattern. We also showed how estimates of admixture from model‐based clustering could be used to avoid ex‐PVP lines of mixed heterotic background when selecting lines to maximize the genetic divergence and combining ability of CIMMYT heterotic groups.