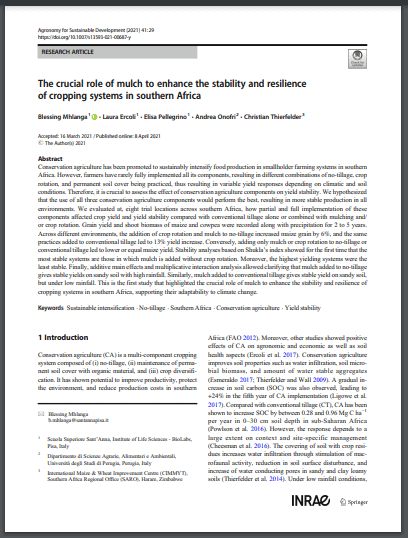 Conservation agriculture has been promoted to sustainably intensify food production in smallholder farming systems in southern Africa. However, farmers have rarely fully implemented all its components, resulting in different combinations of no-tillage, crop rotation, and permanent soil cover being practiced, thus resulting in variable yield responses depending on climatic and soil conditions. Therefore, it is crucial to assess the effect of conservation agriculture components on yield stability. We hypothesized that the use of all three conservation agriculture components would perform the best, resulting in more stable production in all environments. We evaluated at, eight trial locations across southern Africa, how partial and full implementation of these components affected crop yield and yield stability compared with conventional tillage alone or combined with mulching and/or crop rotation. Grain yield and shoot biomass of maize and cowpea were recorded along with precipitation for 2 to 5 years. Across different environments, the addition of crop rotation and mulch to no-tillage increased maize grain by 6%, and the same practices added to conventional tillage led to 13% yield increase. Conversely, adding only mulch or crop rotation to no-tillage or conventional tillage led to lower or equal maize yield. Stability analyses based on Shukla’s index showed for the first time that the most stable systems are those in which mulch is added without crop rotation. Moreover, the highest yielding systems were the least stable. Finally, additive main effects and multiplicative interaction analysis allowed clarifying that mulch added to no-tillage gives stable yields on sandy soil with high rainfall. Similarly, mulch added to conventional tillage gives stable yield on sandy soil, but under low rainfall. This is the first study that highlighted the crucial role of mulch to enhance the stability and resilience of cropping systems in southern Africa, supporting their adaptability to climate change.