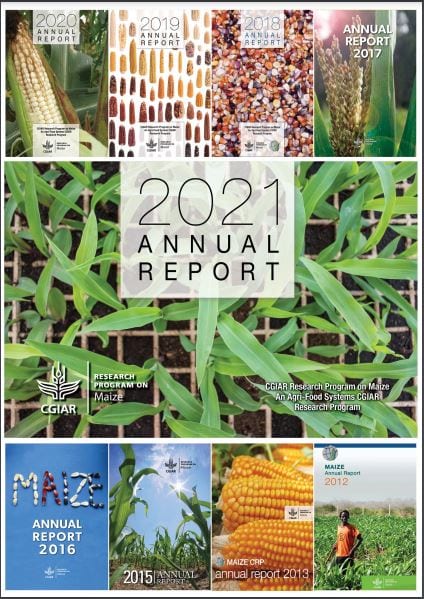 Maize is projected to overtake wheat as the most widely grown crop in the world in the coming decade. By 2030, researchers project there will be 227 million maize farms globally, a 5% increase over 2020 figures (Erenstein et al., 2021). While the low and lower-middle Income countries (LMICs) have more than four times as many farms and twice the rural population as high-Income countries (HIC), they have half the agricultural area and an average farm size one tenth of that of HICs. Only 32% of maize is produced in the LMICs. These farm number estimates and the associated indicators merit more attention in efforts towards global sustainable development and economic and rural transformation – see MELIA 4457. One fact remains clear: Farms will remain the foundation of rural development. The CGIAR Research Program on Maize (MAIZE) not only carried on its diverse portfolio of R4D work to benefit resource constrained smallholders in the world’s tropical and subtropical regions through its final operating year, it has guided foresight and targeting processes for the recently launched OneCGIAR Initiatives and the redesigned research portfolio. CGIAR’s 50 years of investment in research on abiotic stress tolerance underwrote significant yield gains and the development of genetic sources of stress tolerance and disease resistance used by national maize breeding programs (Byerlee and Edmeades 2021, p.18). By 2020, over 230 improved hybrid and open-pollinated varieties(OPVS) with drought tolerance and other key adaptive traits were released, and many were rapidly adopted by smallholders (Byerlee and Edmeades, p.17). Combining tolerance to abiotic stresses, Striga and major maize diseases resulted in further adoption of improved varieties. In 2015, the aggregate yearly economic benefits of using CGIAR-related maize varieties released after 1994 were estimated to be between US$ 0.66-1.05 billion, after accounting for the CGIAR parentage share (i.e. 80.5%; Krishna et al., 2021, p.vi) – see SLO 1.1, Table 1. During 2011-2021 MAIZE and partners focused on Conservation Agriculture-based (CA) Climate-smart Agriculture (CSA) innovations in southern Africa in a systematic, rather than a single commodity technology approach. They generated scientific evidence and enhanced local stakeholders’ capacity, which informed policy change by several governments towards smallholders’ sustainable intensification (see feasibility study confirming business case) – see Table 3, OICR4479. MAIZE and its lead Center CIMMYT were key knowledge providers to the Government of Zimbabwe for its “Pfumvudza” scaling concept. By July 2021, the Ministry of Agriculture announced it had reached 2.2 million farmers, which made the country food secure for the first time in several decades. This success prompted the government to engage MAIZE and CIMMYT in an Alliance on Smallholder Mechanization, which aims to help 1 million smallholders access mechanization services by 2025. Adoption of CSA practices in Malawi, Zambia, and Zimbabwe positively impacted farmers’ food security and household income. To date, farmers have adopted CA systems in the three countries on >627,000 ha (Kassam et al., 2019); and more than 3 million farmers have benefited from large governmental investment. Studies have shown that the impact of adoption was positive and significant – see SLO 1.1, Table 1. MAIZE and its partners looked at interactions between farmers and agro-dealers and their impact on maize seed choices, challenges faced by retailers and seed companies to expand maize hybrids sales, and the effects of remoteness and competition on seed prices and choice (Rutsaert, P et al., 2021). This multi-year research has generated growing donor and investor interest in seed marketing and distribution research – see Table 3, (4465). 8 MAIZE and WHEAT researchers also published findings based on gender-transformative research and methods with clear policy implications for Ethiopia, Malawi and Tanzania, underlining the significant gender gaps associated with agricultural technologies’ adoption. In gender-intentional maize breeding in sub-Saharan Africa (12: 2021,),MAIZE researchers evidenced gender-differentiated preferences for maize varieties and proposed changes in research approaches and priorities.