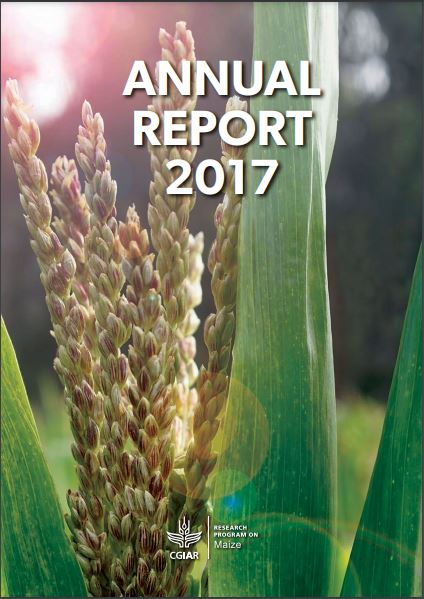 Consultative Group on International Agricultural Research (CGIAR)
In 2017, 79 improved maize varieties were released by MAIZE partners worldwide, including 26 in Latin America, 44 in Sub-Saharan Africa and 9 in Asia. These varieties are based on use of CGIAR lines from the International Maize and Wheat Improvement Center (CIMMYT) and the International Institute of Tropical Agriculture (IITA). Some of the special traits stacked in these varieties include drought and heat tolerance, nitrogen use efficiency, enhanced protein quality, high kernel zinc and resistance to diseases of regional or global importance, such as maize lethal necrosis (MLN), tar spot complex (TSC), and resistance to the parasitic weed, Striga. The fall armyworm (FAW), a devastating insect-pest from the Americas, continues its march across subSaharan Africa. MAIZE has been working closely with international, regional and national partners to produce a comprehensive technical guide on the integrated FAW management. The MAIZE team is also working intensively to curb the spread and impact of maize lethal necrosis (MLN) in sub-Saharan Africa through the development and deployment of MLN-resistant maize hybrids, besides strengthening the capacities of national plant protection organizations across sub-Saharan Africa on MLN diagnostics and management. The rapid response to MLN and ongoing intensive efforts against FAW highlight MAIZE’s expertise and partnerships to counter the present and future pest/disease challenges in the tropics. The release of second-generation tropicalized haploid inducers (CIM2GTAILs) and the use of over 93,0000 doubled haploid (DH) lines in maize breeding programs in Latin America, Africa and South Asia have great potential to increase genetic gains for tropical breeding programs. Sustainable intensification in maize based systems has yielded excellent results. MAIZE researchers found compelling research evidence on the multiple benefits of conservation agriculture and argued that it should be included as one of the major technology packages in Ethiopia’s national agricultural extension system. In “Gender and innovation processes in maizebased systems,” a report from the GENNOVATE initiative to MAIZE, researchers found that improved maize seeds ranked as among the two most important agricultural innovations to have come into their communities for both women and men. I wish to thank MAIZE partners, funders and stakeholders for their continued support and participation. Without the generous support of our funders, MAIZE could not tackle emerging challenges such as maize pests and diseases or climate variability. The CGIAR Research Program on Maize (MAIZE) receives W1&W2 support from the Governments of Australia, Belgium, Canada, China, France, India, Japan, Korea, Mexico, Netherlands, New Zealand, Norway, Sweden, Switzerland, UK, US and the World Bank. We thank you for reading this Annual Report, and look forward to sharing our updates and achievements with you in the years to come.