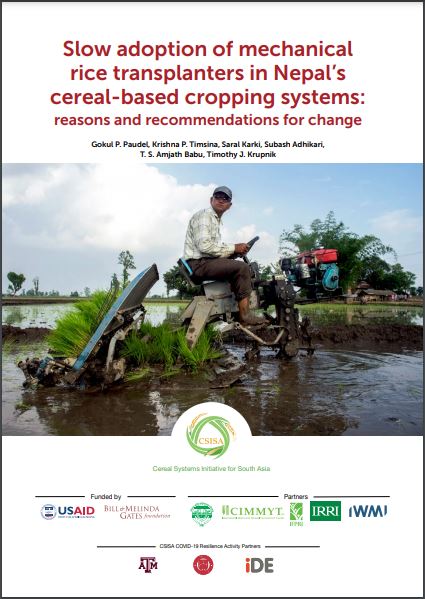 In 2014, the Government of Nepal introduced an agricultural farm mechanization policy, intended to expand farmers’ access to mechanization in order to overcome the problem of acute labor shortages caused by out-migration (Gauchan and Shrestha, 2017). Although agricultural mechanization has a long-established history in Nepal, starting with the introduction of two- and four-wheeled tractors in the 1970s (Biggs and Justice, 2015), this formalization of mechanization policy provided an opportunity to both the public and private sectors to invest in and expand farmers’ access to machinery. The promulgation of this policy was viewed as an important step, and an indication of the government’s commitment to keeping up with its neighbors in South Asia, including India and Bangladesh, both of which have their own strong agricultural mechanization policies. Nevertheless, labor out-migration and rising labor wages continue to be serious issues in the region, but particularly in Nepal, with farmers either not able to locate the labor they require for farm operations or to afford labor when it is needed (Maharjan et al., 2013a, 2013b). This compels farmers to delay crop management and other intercultural operations, aggravating agricultural productivity and profitability (Paudel et al., 2019). Policy responses in Nepal conversely favor the expansion of rural mechanization by providing subsidy and support schemes through different promotional programs. Mechanization interventions which reduce the labor required for rice cultivation are critically important to making rice farming a productive and profitable enterprise (Bhandari et al., 2015; Dhital, 2017). Although around 1.5 million hectares of rice are cultivated in Nepal (MoALD, 2020), in 2020 the country imported around 900,000 tons of rice from India worth around NPR 22.24 billion (or USD 190 million) (GoN, 2020), an amount that is projected to increase in the future and which is a growing concern for agricultural policy makers. Timsina et al. (2021) has estimated the production and demand of rice for the coming 30 years and suggested that demand can be met through increasing current productivity by at least 27%–43% by 2030 and 42%–85% by 2050 based on different scenarios considering constant growth rate business as usual scenario, increase in production (due to adoption of improved technologies) and decrease in production (due to climate change effect), and change in demand. However, the current low productivity and the high cost of rice cultivation are partially attributed to this increasing dependence on imports (Khanal, 2018). It is essential, therefore, to identify the constraints acting upon Nepal’s farmers and preventing the widespread adoption of mechanized rice transplanters (MRTPs), which are increasingly advocated by policy makers as a key solution to enhanced rice productivity. With such information, governmental programs can work together more effectively to encourage scale-appropriate mechanization together with development partners. Clarity on the performance of, and constraints to, the use of existing MRTPs in Nepal could also help to put in place measures to address the challenges that farmers using MRTPs face, which are at this point largely ignored.