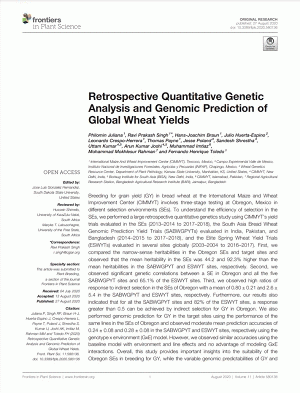 Retrospective quantitative genetic analysis and genomic prediction of global wheat yields
Breeding for grain yield (GY) in bread wheat at the International Maize and Wheat Improvement Center (CIMMYT) involves three-stage testing at Obregon, Mexico in different selection environments (SEs). To understand the efficiency of selection in the SEs, we performed a large retrospective quantitative genetics study using CIMMYT’s yield trials evaluated in the SEs (2013–2014 to 2017–2018), the South Asia Bread Wheat Genomic Prediction Yield Trials (SABWGPYTs) evaluated in India, Pakistan, and Bangladesh (2014–2015 to 2017–2018), and the Elite Spring Wheat Yield Trials (ESWYTs) evaluated in several sites globally (2003–2004 to 2016–2017). First, we compared the narrow-sense heritabilities in the Obregon SEs and target sites and observed that the mean heritability in the SEs was 44.2 and 92.3% higher than the mean heritabilities in the SABWGPYT and ESWYT sites, respectively. Second, we observed significant genetic correlations between a SE in Obregon and all the five SABWGPYT sites and 65.1% of the ESWYT sites. Third, we observed high ratios of response to indirect selection in the SEs of Obregon with a mean of 0.80 ± 0.21 and 2.6 ± 5.4 in the SABWGPYT and ESWYT sites, respectively. Furthermore, our results also indicated that for all the SABWGPYT sites and 82% of the ESWYT sites, a response greater than 0.5 can be achieved by indirect selection for GY in Obregon. We also performed genomic prediction for GY in the target sites using the performance of the same lines in the SEs of Obregon and observed moderate mean prediction accuracies of 0.24 ± 0.08 and 0.28 ± 0.08 in the SABWGPYT and ESWYT sites, respectively using the genotype x environment (GxE) model. However, we observed similar accuracies using the baseline model with environment and line effects and no advantage of modeling GxE interactions. Overall, this study provides important insights into the suitability of the Obregon SEs in breeding for GY, while the variable genomic predictabilities of GY and the high year-to-year GY fluctuations reported, highlight the importance of multi-environment testing across time and space to stave off GxE induced uncertainties in varietal yields.