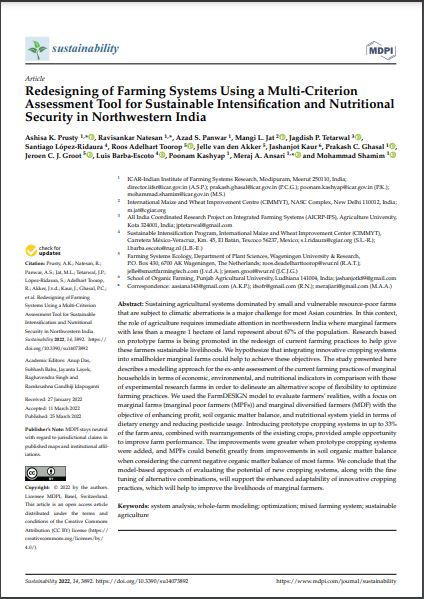 Sustaining agricultural systems dominated by small and vulnerable resource-poor farms that are subject to climatic aberrations is a major challenge for most Asian countries. In this context, the role of agriculture requires immediate attention in northwestern India where marginal farmers with less than a meagre 1 hectare of land represent about 67% of the population. Research based on prototype farms is being promoted in the redesign of current farming practices to help give these farmers sustainable livelihoods. We hypothesize that integrating innovative cropping systems into smallholder marginal farms could help to achieve these objectives. The study presented here describes a modelling approach for the ex-ante assessment of the current farming practices of marginal households in terms of economic, environmental, and nutritional indicators in comparison with those of experimental research farms in order to delineate an alternative scope of flexibility to optimize farming practices. We used the FarmDESIGN model to evaluate farmers’ realities, with a focus on marginal farms (marginal poor farmers (MPFs)) and marginal diversified farmers (MDF) with the objective of enhancing profit, soil organic matter balance, and nutritional system yield in terms of dietary energy and reducing pesticide usage. Introducing prototype cropping systems in up to 33% of the farm area, combined with rearrangements of the existing crops, provided ample opportunity to improve farm performance. The improvements were greater when prototype cropping systems were added, and MPFs could benefit greatly from improvements in soil organic matter balance when considering the current negative organic matter balance of most farms. We conclude that the model-based approach of evaluating the potential of new cropping systems, along with the fine tuning of alternative combinations, will support the enhanced adaptability of innovative cropping practices, which will help to improve the livelihoods of marginal farmers.