Recalibrating the reported returns to agricultural R&D: what if we all heeded Griliches? 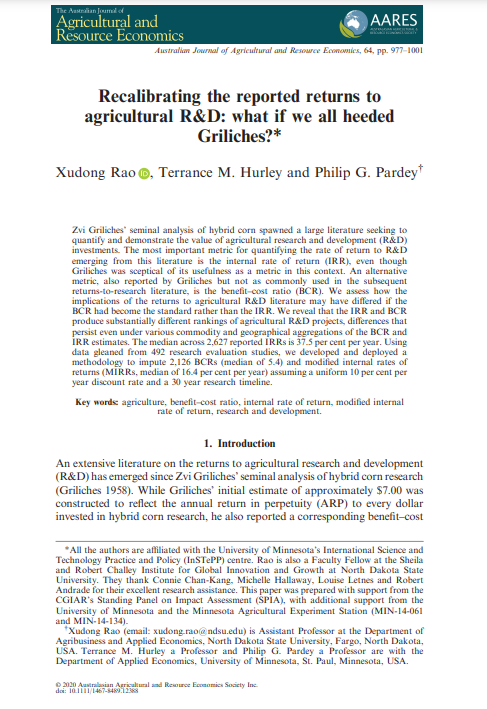 The most important metric for quantifying the rate of return to R&D emerging from this literature is the internal rate of return (IRR), even though Griliches was sceptical of its usefulness as a metric in this context. An alternative metric, also reported by Griliches but not as commonly used in the subsequent returns-to-research literature, is the benefit–cost ratio (BCR).

We assess how the implications of the returns to agricultural R&D literature may have differed if the BCR had become the standard rather than the IRR. We reveal that the IRR and BCR produce substantially different rankings of agricultural R&D projects, differences that persist even under various commodity and geographical aggregations of the BCR and IRR estimates. The median across 2,627 reported IRRs is 37.5 per cent per year. Using data gleaned from 492 research evaluation studies, we developed and deployed a methodology to impute 2,126 BCRs (median of 5.4) and modified internal rates of returns (MIRRs, median of 16.4 per cent per year) assuming a uniform 10 per cent per year discount rate and a 30 year research timeline.